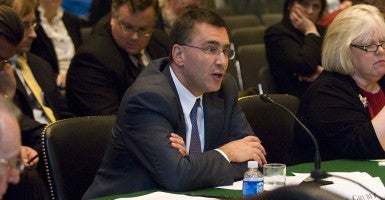 'That's not too painful,' Jonathan Gruber writes in a comic book explanation of Obamacare. (Photo: Newscom)

Jonathan Gruber, the Obamacare architect made notorious in newly surfaced videos, credits the “stupidity of the American voter” with helping pass the Affordable Care Act. To help Americans understand the law, it turns out, Gruber wrote — and starred in — a 150-page comic book titled “Health Care Reform: What It Is, Why It’s Necessary, How It Works.”

Throughout 12 chapters — with titles such as “Through the Past, Darkly,” “Selling Fear Instead of Facts” and “Good Things on the Horizon” — Gruber, one of the characters, chronicles the journeys of four Americans as they navigate the health insurance market under Obamacare. A used copy of the hardback edition commanded $389.44 and up this evening on Amazon, but you could get a new paperback edition for around $5.

The book, illustrated by Nathan Schreiber, was published in December 2011, one year after the Democrat-controlled Senate passed the health care law on Christmas Eve. Black-and-white comic art illustrates the history of the health insurance market before Congress passed President Obama’s signature domestic achievement, popularly known as Obamacare. The comic book also seeks to debunk the arguments of opponents of the Affordable Care Act  — including a character bearing a striking resemblance to conservative radio host Rush Limbaugh — and deflate myths “designed by reform opponents to scare people away from the facts.” >>> A Year After Glitch-Filled Rollout, HealthCare.gov Opens for Business Again

But in Texas, the second state Gruber visits, residents don’t fare as well. The Lone Star State, the text says, is “a perfect example of how the health care system spends its resources poorly.” Gruber, an economist at Massachusetts Institute of Technology,  goes on to explain the benefits of the Affordable Care Act and how the Congressional Budget Office analyzed the law.  In videos of his appearances discovered over the past week, however, Gruber describes how the Obama administration and Senate Democrats manipulated the language of the law to ensure the CBO didn’t score it as a tax measure.

In the comic, Gruber reminds Americans that not purchasing health insurance results in a fine — $95 or 1 percent of income in 2014, with increases in the penalty each subsequent year.

“That’s not too painful,” Gruber writes. “More like a warning than anything else.”

When one of the characters, a white male, tells Gruber he fears Obamacare will “muck up” his existing health plan, the Obamacare architect reassures the man that if he likes his plan, he can keep it.

“And there’s also a strong ‘grandfather’ provision that allows you to keep your current policy if you like it. Even if it doesn’t meet minimum standards,” Gruber tells him.

In the weeks leading up to Obamacare’s rollout, though, millions of Americans received a notice from their insurance company informing them of the cancellation of their existing plan. Obama tried to remedy the issue, but millions more continue to receive cancellation notices. For those worried about the redistributive aspects of Obamacare, Gruber reassures them in the comic book that “this is not socialism”:

At the end of the day, what everyone wants is a way to make sure we’re taken care of when we’re sick, and that it doesn’t ruin us financially to get that care. No one disputes that.

Gruber’s comic book received praise from other Obamacare advocates. In a blurb, then-Sen. John Kerry, D-Mass., said the book is “fun and informative, and it boils down the facts of health care reform for all Americans.”

In separate reviews, the New York Times and Washington Post applauded Gruber for providing an easy breakdown of the Affordable Care Act.

Over the last week, more than six videos of Gruber mocking Americans have surfaced. In one, Gruber discusses how the Affordable Care Act purposefully was crafted with a “lack of transparency.” In a second, the MIT economics professor calls Americans “stupid.”

President Obama attempted to distance himself Sunday from Gruber during a news conference at the G20 summit in Brisbane, Australia. Obama said Gruber was “some adviser who never worked on our staff.”

However, the Obamacare architect visited the White House more than a dozen times and received $400,000 in taxpayer money for consulting with the Department of Health and Human Services.

Note: This report has been modified.