Elections Should Matter: Nominees Shouldn’t Be Approved During the Lame-Duck Session 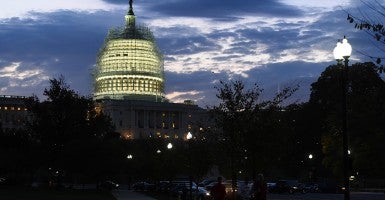 An awful lot of people are confused as to just what is meant by a lame duck Congress. It’s like where some fellows worked for you and their work wasn’t satisfactory and you let ’em out, but after you fired ‘em, you let ‘em stay long enough so they could burn your house down. —Will Rogers

Members of Congress who have been defeated, as well as those who did not seek re-election, are still be able to vote in the lame-duck session, which lasts until the new Congress begins Jan. 3, despite the fact that they “are no longer accountable to the voters” as Senators Ted Cruz , R-Texas,and Mike Lee R-Utah, have said.

Members of Congress should avoid taking up any substantive legislation or nominations during lame duck sessions since such action involving members who have been replaced will directly negate the expressed will of the people through the votes they have cast in the recent election.

Since the Twentieth Amendment, which specified that the terms of Members of Congress begin and end on Jan. 3 of odd-numbered years, took effect in 1935, there have been 19 lame duck sessions, including most recently in 2012 during the 112th Congress.

The lame duck session in 1950 occurred as Chinese troops were crossing into Korea and “Gen. Douglas A. MacArthur warned Congress that the United Nations faced ‘an entirely new’ war in the region.” In 2010, Congress passed the ill-advised new Strategic Arms Reduction Treaty (New START) arms control treaty with Russia and a number of other bills including a defense authorization funding bill, a repeal of the “don’t ask, don’t tell” policy in the military, and an extension of income tax cuts that would otherwise have expired at the end of the year.

Prior to the past two decades, with the exception of times when the United States was facing great adversity or participating in armed conflict, lame-duck sessions were both rare and inconsequential. Legislators seemed to understand—as did the public—that having legislators who had been turned out of office and were no longer accountable to voters make decisions on appropriations, nominations and other substantive matters was both undemocratic and dangerous. Not only do constituents lose their ability to influence such legislators after an election, but congressional leadership often puts off votes on important legislation for the very purpose of avoiding having legislators in tough re-election campaigns vote on controversial matters before the election. This strategic decision is directly intended to help legislators avoid having to take responsibility for their actions when voters can call them to account on Election Day.

By scheduling matters such as appropriations acts during a lame duck session, congressional leadership can make such bills “must pass” legislation to avoid a government shutdown or the cutting of government services that could endanger national security. This also allows all types of earmarks and pork barrel spending projects to be attached to these must-pass bills, increasing the unaccountability of Members of Congress. As Romina Boccia outlines in a new Heritage Issue Brief, there are a whole series of bills that Congress should avoid rushing through a lame duck session this year.

That principle applies just as strongly to avoiding consideration of nominations to positions within the executive branch or the federal judiciary during a lame duck session. Having members of the Senate whose re-election efforts have been rejected by voters or who are voluntarily retiring from the Senate make decisions approving or disapproving nominees who will be making major decisions that can affect the rights, liberty and freedom of American citizens thwarts our system of representative democracy.

High-level positions such as the attorney general of the United States and federal judgeships deserve deliberate, studied review bysenators, as well as thorough hearings delving into the background, record and legal abilities and opinions of a nominee. Such a substantive review cannot be done in the short time of a lame duck session, and any such attempt would prevent newly elected senators from participating in the process.

Since there are more than two dozen judicial nominees currently pending before the Senate, this would give outgoing senators the ability to influence the decisions of federal courts with lifetime appointments in many different parts of the country, a fundamentally unfair and unjust prospect.

Principled legislators should insist that no such matters be considered in lame-duck sessions except under the most extraordinary of circumstances, which do not exist at the present time. Such lame-duck sessions should be rejected in favor of a “transparent process respectful of the American people and our republican institutions.” And Congress should retreat from its recent behavior and go back to making lame duck sessions both rare and inconsequential.

This piece is adapted from “The Dangers of Lame Duck Sessions in Congress—Unfair and Undemocratic,” a Heritage Foundation Issue Brief.