What Do the 2016 GOP Hopefuls Really Think About Same-Sex Marriage? 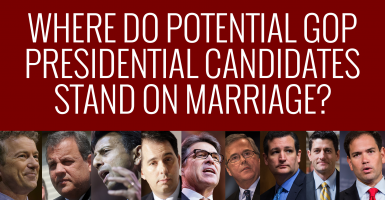 The marriage issue didn’t play a major role in the 2014 midterms, but activist courts overturning state laws and lawsuits threatening the rights of those who disagree with redefining marriage may very well make the issue a top one in 2016.

Since 1998 and across the early 2000s, millions of Americans voted at the state level to define marriage as the union of a man and woman and more than 38 states have such laws on their books today. Yet with state and district courts overturning those laws across the country and the Supreme Court punting on the issue earlier this fall, a number of questions increasingly come in to play:

These are questions potential presidential candidates should be prepared to answer.  A sampling of statements from leading GOP contenders shows most have some homework to do. All say they favor marriage being defined as the union of a man and woman–good–but in light of recent events, few offer policy or legal prescriptions for how they would actually promote and defend that position or deal with the increasing number of related issues raised above.

Below, in alphabetical order, are some of the most talked about contenders for the 2016 GOP nomination, in their own words: Former Gov. Jeb Bush, R-Fla., in a 2013 interview with Newsmax: “I would prefer it to be a state-by-state issue.  That’s how we have dealt with a lot of issues in the United States. Our federal system is a spectacular way to deal with changing mores–and states can take advantage of opportunities much better than federal government.” Gov. Chris Christie, R-N.J., talking to reporters this summer at the National Governor’s Association: “It should be done state by state.”

In 2013, Christie did not appeal the New Jersey State Supreme Court’s decision ruling the state’s ban on gay marriage was unconstitutional.  A press release from the governor’s office stated:  “Although the governor strongly disagrees with the court substituting its judgment for the constitutional process of the elected branches or a vote of the people, the court has now spoken clearly as to their view of the New Jersey Constitution and, therefore, same-sex marriage is the law.” Sen. Ted Cruz,  R-Texas, via a press release following the Supreme Court’s decision not to take up any of the lower court cases overturning state marriage laws:  “Marriage is a question for the States. That is why I have introduced legislation, S. 2024, to protect the authority of state legislatures to define marriage. And that is why, when Congress returns to session, I will be introducing a constitutional amendment to prevent the federal government or the courts from attacking or striking down state marriage laws.” Gov. Bobby Jindal, R-La., responding the day after the Supreme Court decision, said in a conference call with reporters that he agrees with Sen. Cruz and that, “I support what the senator is doing.”  He also said, “I know there are folks that are changing their position on this.  I know former Secretary [of State Hillary] Clinton, President Obama, have changed their positions on this. I know you can certainly see where opinion polls it appears a lot of folks have changed their positions on this. I’m not a weather vane on this issue, and I’m not going to change my position. I continue to believe that marriage is between a man and a woman.” Sen. Rand Paul, R-Ky., talking to a reporter following an event at the College of Charleston in September: “I believe in old-fashioned traditional marriage. But I don’t really think the government needs to be too involved with this, and I think that the Republican Party can have people on both sides of the issue.” (I’ve written before on Paul’s lack of clarity on this issue.) Gov. Rick Perry, R-Texas, has supported the federal marriage amendment in the past, but following the ruling by a federal judge in February of 2014 that a Texas law banning gay marriage was unconstitutional, Perry made a states right argument, saying, “Texans spoke loud and clear by overwhelmingly voting to define marriage as a union between a man and a woman in our Constitution. The Tenth Amendment guarantees Texas voters the freedom to make these decisions, and this is yet another attempt to achieve via the courts what couldn’t be achieved at the ballot box.” Sen. Marco Rubio, R-Fla., speaking at Catholic University last July: “Those who support same sex marriage have a right to lobby their state legislatures to change state laws. But Americans who support keeping the traditional definition of marriage also have a right to work to keep the traditional definition of marriage in our laws without seeing that overturned by a judge.” Rep. Paul Ryan, R-Wis, explaining his 2004 vote for a federal marriage amendment which did not muster the two-thirds of votes needed to pass:  “Marriage is not simply a legal arrangement between individuals. The institution of marriage is an integral part of our civil society, and its significance goes well beyond eligibility for benefits and similar considerations. Its future should not be left to a few overreaching judges or local officials to decide.  That’s why I support this effort to amend our Constitution to protect marriage.”

Fast forward to 2012 where Ryan said as the GOP vice presidential nominee that he believes “marriage is between a man and a woman” but depending on actions of the Supreme Court it may become a “federalism” issue where states become the deciders. Gov. Scott Walker, R-Wis., in a press statement in 2006 calling on the state legislature to pass a constitutional amendment:  “The Wisconsin State Legislature is currently deliberating this issue, and I strongly urge them to pass the constitutional amendment defining a marriage as a commitment between one man and one woman. Then, it will be up to the voters to say what defines a marriage in Wisconsin.”  (The legislature passed the amendment, voters overwhelmingly approved it, but then a federal judge ruled it unconstitutional. Wisconsin was one of the states directly affected by the Supreme Court’s decision not to hear the lower court cases earlier this fall.)

Here are Walker’s comments following the SCOTUS decision: “For us, it’s over in Wisconsin.”  He continued, “I’d rather be talking in the future now more about our jobs plan and our plan for the future of the state. I think that’s what matters to the kids. It’s not this issue.”

But “this issue” does matter and will continue to matter to many Americans voting in the 2016 Republican primaries and the general election. The full court press by the pro same-sex marriage lobby to label anyone opposing them as a bigot and anti-equal rights, along with public opinion polls showing an uptick in support for same-sex marriage among the general population, no doubt makes it one of the tougher issues to talk about.

But newsflash: Running for president isn’t for sissies.  Additionally, public opinion polls have not mirrored voter behavior.  Regardless of what Americans tell pollsters, the majority of those going to the polls that matters most, the voting booth, have supported defining marriage as being between one man and one woman.

Those contemplating throwing their hat into the 2016 ring should contemplate now how they will address this issue.  It’s not going away.