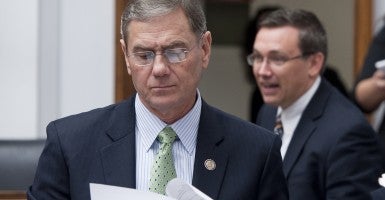 Two federal agencies have agreed to investigate the controversial government program known as Operation Choke Point, which critics say targets businesses that are out of favor with the Obama administration.

The Justice Department and the Federal Deposit Insurance Corp. agreed to the investigation after more than 30 members of Congress, led by Rep. Blaine Luetkemeyer, R-Mo., raised questions about Operation Choke Point.

In response to the government’s announcement, Luetkemeyer said:

The correspondence I received from the FDIC and DOJ is a great first step in ensuring that those responsible for Operation Choke Point are held accountable and that Congress and the American people receive details and answers they deserve.

The FDIC committed to conducting a review of the agency’s “supervisory activities related to Operation Choke Point” to ensure the actions taken were consistent with laws and regulations.

Responsible for regulating and auditing more than 4,500 banks, the FDIC also agreed to investigate what it calls a “serious allegation” by the congressmen that an FDIC senior official provided false testimony to Congress on the operation.

“Going forward, we will work through the committees and report the results of our work when and as it is appropriate to do so,” wrote Fred W. Gibson Jr., principal deputy inspector general for the FDIC.

Likewise, the Justice Department initiated its own “preliminary inquiry” to determine if a more substantive investigation is in order. Until more information is disclosed, Luetkemeyer says he will “continue to push for more transparency and information as to how this unprecedented program was implemented.”