Enjoy Verizon’s Free Downloads All Day. They Could Soon be Illegal. 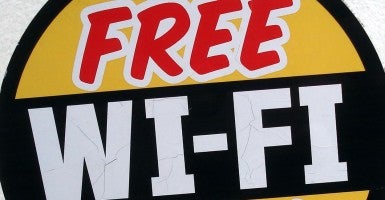 In an act of thanksgiving to its customers (and some strategic marketing), Verizon Wireless has declared it will provide free wireless data and access to certain subscription services on Wednesday, Nov. 26—the day before Thanksgiving and one of the busiest travel days of the year. The company has christened this day of freebies “Connection Day” and will make it available to everyone, not just its own subscribers.

But the first Connection Day might well be the last, thanks to the heavy-handed regulations known as “net neutrality” rules the Federal Communications Commission is considering. The most restrictive version of these rules—recently endorsed by President Obama—likely would ban Internet Service Providers, such as Verizon, from striking deals with app and content producers, such as Amazon.com, that would give users free access to content, a practice known as “sponsored data.”

Despite the fact sponsored data lowers prices for consumers, regulation advocates such as Public Knowledge and Free Press have called for such arrangements to be banned simply because they’ve decided the agreements are unfair and “not how the Internet is supposed to work.”

But these offers could violate the net neutrality regulations being pushed by President Obama, especially if the sponsors are paying. Advocates would have a hard time explaining to travelers who are enjoying their free connection and new music that FCC regulation could take away these services simply because Verizon is an ISP.

So how does banning this free stuff benefit consumers? It doesn’t. ISPs such as Verizon and content providers should continue to be free to make their own agreements. Consumers have gained the most benefit from the dynamic Internet under the current hands-off regime that allows ISPs to do things such as Connection Day. It would be foolish to kill that dynamism with regulation now.

This Thanksgiving, Americans traveling home should be thankful the FCC has not implemented net neutrality rules quite yet. They might not be as inclined to give the FCC their blessings next year.