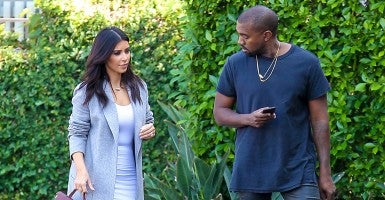 Kim Kardashian and Kanye West head to the Kardashians' office in Los Angeles. Kim's net worth is around $65 million. (Photo: Newscom)

The Congressional Budget Office released its annual study of the distribution of income and federal taxes. It tells us what we’ve long known: The rich pay a lot of federal taxes, much more than the middle class and the poor.

President Obama for many years pushed his infamous Buffett Rule, which said that the highest-earning Americans should pay at least 30 percent of their income in federal taxes. According to CBO, the average tax rate of the top 1 percent was 29 percent in 2011 (the last year of data in the report). The Buffett Rule, therefore, was largely in effect.

However, CBO also projected forward to 2013. Based on tax increases that began in 2013, CBO predicts the top 1 percent paid a 33 percent effective rate in federal taxes last year. Obama’s policies have more than established the Buffett Rule.

The share of tax and the average tax rate of the bottom 20 percent both increased in 2011 compared to 2010. However, their taxes did not rise. Rather, they received less money back through their income taxes because of refundable tax credits, likely because of the economy’s improvement.

The result of a highly progressive tax structure and income redistribution programs run through the tax code and outside it means that income inequality fell when looking at before and after-tax incomes. The top 20 percent saw their share of income fall from 52 percent before tax to 48 percent after. Every other income group’s after-tax share was greater than its before-tax share.

One of President Obama’s goals was to increase the tax burden on the rich. He succeeded in raising their already substantial burden. Those hikes are one reason the economy continues to stagnate well below its potential because they have stifled investment by reducing incentives to take risk.