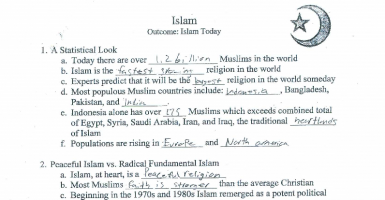 Is the faith of most Muslims “stronger” than that of the typical Christian? That’s what one public high school in North Carolina apparently is teaching students.

Outraged over the “correct” answers to her son’s ninth-grade assignment about Islam, a mother in Union County, N.C., turned to local news reporters to shed light on his school’s fill-in-the-blank worksheet.

Upsetting the mom most? A statement that read, “Most Muslims’ faith is stronger than the average Christian.” “If you are going to do it, let’s do it right,” the mother—who asked not to be identified—told WJYZ-TV. “I really feel there is a spin on this.”

School officials have not confirmed that “faith is stronger” is the correct answer to the question, despite several requests by reporters at WJYZ, a Fox affiliate.

Other statements on the assignment include “Islam, at heart, is a peaceful religion.”

This is the second report of a parent expressing outrage over a child’s Islam-related school assignment in recent weeks.

In October, an Iraq veteran was banned from his daughter’s high school after objecting to a required homework assignment about Islam.

Kevin Wood, father of an 11th-grader at La Plata High School in Charles County, Md., was upset to discover a teacher had asked his daughter to write a three-page essay about Islam’s Five Pillars, Mecca and Mohammed.

“I don’t agree with it,” Wood said in a phone interview with Fox News. “I said you can’t study God or Christianity in school; you have atheists suing schools for saying God and the Pledge [of Allegiance], and not being able to say prayers before football games … but we can force-feed our kids Islam.”