This Solar Firm Wants $539 Million From the Government. It Just Might Get It, Even After Solyndra. 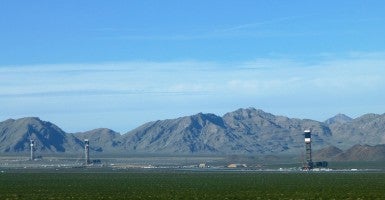 If you’re a taxpayer, here’s a story that should really make your blood boil.

Ivanpah, a solar plant in California, received a $1.6 billion loan guarantee backed by the taxpayers. California has one of the nation’s most ambitious renewable portfolio standards. It mandates 33 percent of the state’s power must come from renewable sources. In essence, the RPS guarantees a market for Ivanpah’s product.

To do that, the plant actually needs to generate adequate amounts of electricity, which it is failing to do because it has not received as much sunshine as needed. So, the company is applying for a $539 million taxpayer-funded grant to pay off the taxpayer-backed loan.

To be fair, if the federal government is willing to risk taxpayer dollars, it would be foolish for the companies to not take advantage of such programs. In fact, the renewable energy giant NRG, which, along with Google, is backing Ivanpah, responded by saying, “NRG believes in a clean and sustainable energy future and therefore participates in available government programs to develop and expand the use of clean energy to accelerate America’s energy independence.”

One problem with NRG’s statement is that even if Ivanpah generated the 392 gross megawatts of power it plans to, the additional electricity won’t make much difference when it comes to energy independence. Most electricity consumed in the United States is produced domestically, with a small amount imported from friendly nations.

If Google and NRG think Ivanpah is a profitable endeavor, they should make the investment with their own funds, rather than exposing taxpayers.

Another problem is that energy independence should not be the goal of energy policy. The goal should be to create a free market in energy that allows producers and consumers to respond to energy prices and market signals appropriately.

The biggest problem is that these taxpayer-funded programs are available in the first place. Taxpayers have been on the hook for a number of now-bankrupt companies or ones in serious financial distress.

Proponents of the program argue that the Department of Energy’s loan guarantee program has a better track record than most banks, but that doesn’t validate the necessity of the program. If anything, it’s all the more reason to take away the handouts because these companies could have secured private financing if their technology is viable. If Google and NRG think Ivanpah is a profitable endeavor, they should make the investment with their own funds, rather than exposing taxpayers.

Although federal government grant and loan guarantee programs are touted as jobs creators and economic stimulators, subsidizing inefficient technologies is an economic drain on America’s economy. Taxpayer-funded programs do not create jobs. They shift them from one sector of the economy to another. The opportunity cost of government spending is the lost labor and capital extracted from other sectors (ones that do not need government support) of the economy to artificially support the politically preferred ones.

The only way to truly protect taxpayers and prevent more stories like Ivanpah is to get rid of these absurd government programs for all energy sources and technologies.