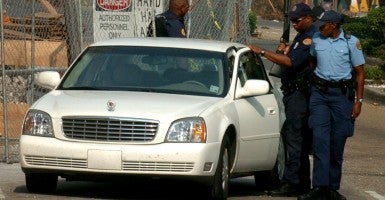 Police officers are trained to know what property of yours makes the most sense to seize.

The Heritage Foundation has written much about a law enforcement tool known as civil asset forfeiture, which allows police departments to generate revenue from the seizure of money, cars, homes or anything else of value which they allege is connected to criminal activity.

Just looking at the numbers and reading the anecdotes, it is clear that law enforcement authorities are often tempted to prioritize their enforcement efforts where it is most profitable—but thanks to the Institute for Justice and The New York Times, we now know that this is not the result of a few rogue officers.

Instead, targeting expensive, easily liquidated property is how departments are trained.

At continuing education seminars around the country, civil forfeiture experts are on record not only encouraging law enforcement officers to use the practice, but offering advice on the most lucrative property to seize.

The jackpot items are televisions, cash and cars—jewelry just doesn’t pay, and neither do drugs (which perhaps is why some operations focus on the money coming out of a drug deal rather than the illicit substances going in). Officers were also advised on how to deal with judges who may not simply rubber stamp a forfeiture and how to ensure that forfeiture money stays in the law enforcement family.

At one seminar, Las Cruces, N.M., city attorney Harry Connelly Jr. lamented having to return a brand-new Mercedes to its owner. Officers were so busy lusting after the car’s forfeiture value that they arrested the car’s intoxicated owner for drunk driving before he had even touched his car door.

Santa Fe Sheriff Greg Solano took a similarly hardline stance when he pushed for a county ordinance allowing his office to seize the vehicles of drunk drivers–until his daughter wrecked his BMW while intoxicated. Suddenly on the receiving, or rather losing, end of a forfeiture, Solano changed his tune.

At another seminar in Georgia, a prosecutor bragged about his role in killing that state’s efforts at reform this past year. Georgia prosecutor Gary Bergman tried to justify the widespread use of forfeiture in his state because of “all the useful things [they] do with the money, the equipment, vehicles.”

Just what are these “useful things” authorities buy with these funds?

In Georgia, that would include the purchase of a Dodge Viper for a DARE (Drug Abuse Resistance Education) program, a personal home security system for a district attorney and sports tickets and private parties, among other purchases.

Even if the funds were spent appropriately, good ends do not justify bad means when property is wrongly taken from innocent owners.

In fact, at a conference in Santa Fe, a police officer took the opportunity to belittle forfeiture’s potential impact on the guiltless by attacking the entire concept of an “innocent owner”—someone who has no knowledge his property is being used to commit a crime. Consider a man arrested for soliciting a prostitute while driving his wife’s car. In seizing the car, police are, in effect, punishing the innocent, betrayed wife.

This is not a hypothetical situation—it’s an actual Supreme Court case. In fact, as many as four out of every five seized vehicles are driven by somebody other than the owner. A statutory “innocent owner” defense is often the only way to win back the car (or home, in some cases).

Most forfeiture proceedings are handled in administrative hearings outside of a courtroom. And many forfeitures are never even challenged, owing simply to the fact that court costs and legal fees outweigh the value of whatever was seized. Many of these hearings are presided over by the very prosecutors whose offices get a cut of whatever they seize. This leaves one person to act as prosecutor, judge and jury—an unfair process if there ever were one.

Civil forfeiture was ramped up three decades ago to combat the violence of organized crime and drug gangs. And perhaps it has a place when due process is provided and it is limited to truly bad actors. But civil forfeiture is a cautionary tale of unintended consequences—what started out with noble goals has morphed into a system with too few checks and too many opportunities for abuse.

Many states are stepping up to the plate and passing reforms: Several bills have been proposed in Congress to reform federal forfeiture laws, and the new Congress should make forfeiture reform a priority.