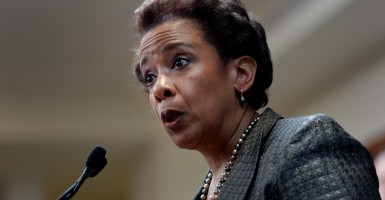 Sens. Ted Cruz and Mike Lee want President Obama’s nominee for attorney general to weigh in on the constitutionality of an executive order that would defer deportation for millions of illegal immigrants.

The attorney general is the president’s chief law enforcement officer. As such, the nominee must demonstrate full and complete commitment to the law.

“The attorney general is the president’s chief law enforcement officer,” wrote Cruz, R-Texas, and Lee, R-Utah. “As such, the nominee must demonstrate full and complete commitment to the law.

“Loretta Lynch deserves the opportunity to demonstrate those qualities,” they added, “beginning with a statement whether or not she believes the president’s executive amnesty plans are constitutional and legal.”

Cruz and Lee are among a group of conservatives that sent a letter last week to outgoing Senate Majority Leader Harry Reid, D-Nev., vowing to “use all procedural means necessary” to fight Obama’s planned executive action.

In their statement on the attorney general nominee, Cruz and Lee also called for Lynch to have a confirmation vote in new Congress in January, rather than this year’s lame-duck session while retiring or recently defeated lawmakers remain in office.

“President Obama’s attorney general nominee deserves fair and full consideration of the United States Senate, which is precisely why she should not be confirmed in the lame-duck session of Congress by senators who just lost their seats and are no longer accountable to the voters,” the senators wrote.