In Another Blow to Obamacare, the Supreme Court Will Hear This Case 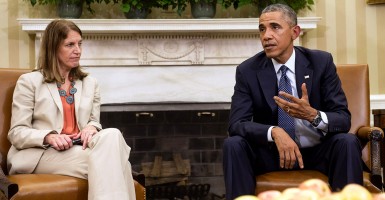 The Supreme Court’s decision to hear the King v. Burwell case exposes another potential weakness in the health care law. In the King case, the Supreme Court will consider whether the Internal Review Service has the authority to expand the application of healthcare subsidies to federal exchanges.

But only 14 states and the District of Columbia established state-based exchanges and even some of those (Oregon and Nevada) are backing out for 2015. In the remainder of states with exchanges, the federal government, not the state governments, established the exchanges.

As my colleague Andrew Kloster summarized in another post on a related case, “The tax subsidies for low-income Americans are only available, “through an Exchange established by [a] State under section 1311.” Federal exchanges are set up under Section 1321 of Obamacare – not Section 1311. But the administration still wants to provide subsidies, even though the law doesn’t appear to authorize the handout.” And there lies the problem.

So should the Supreme Court decide that the subsidies are not valid in the federal exchange, it will mark yet another major blow to Obamacare, because the subsidies in those states where the exchanges were established by the federal government no longer will be available.

One of the first blows to Obamacare also came as a result of a Supreme Court ruling. Although the Supreme Court upheld the individual mandate to purchase health insurance, as part of the NFIB v. Sebelius decision, the Supreme Court ruled that states choosing not to expand their Medicaid program as posited under Obamacare would not lose their entire federal funding for Medicaid, but would lose only the enhanced funding extended under the law. Today, 23 states still have not expanded their Medicaid programs, delivering another blow to the core of Obamacare.

There are other signs that Obamacare is weakening. The promise that Obamacare would bend the cost curve and lower premiums isn’t being fulfilled. Instead, there are increases and higher premiums inside and outside  the exchanges.

The promise that you could keep your plan and your doctor has been dashed as millions face involuntary cancellations, meaning they’ve lost their plan, only to then find narrowed networks in the government exchanges, meaning they have access to fewer doctors and services than before.

The promise of deficit-free spending has also been shown to be a mirage: Obamacare’s policies actually will increase deficits and fall short of producing the savings it promised. And even the revenues expected to help pay for the health care law aren’t materializing.

And probably the weakest link in Obamacare is its lack of public support. The latest Real Clear Politics average for October showed a 13.5-point difference between those who opposition Obamacare and those who support it. Election night exit polls reinforced this point.

As Obamacare’s core continues to weaken, the new Congress should start fresh and advance a new health care agenda.

This agenda, in sharp contrast with Obamacare, should be based on the principles of patient-centered, market-based health reform where individuals can own their own health care and choose the kind of plan that best meets their healthcare needs, and where a level playing field forces the healthcare sector to compete for consumers based on price, quality and value.