Pastor Charged with Criminal Penalty for Feeding the Homeless 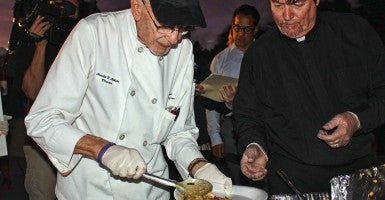 Should a 90-year-old pastor face sixty days in jail and a $500 fine for simply giving food to homeless people? The authorities in Fort Lauderdale, Fla. seem to think so.

Arnold Abbott runs a non-profit charity called Love Thy Neighbor, Inc., which seeks to care for the homeless population in the Fort Lauderdale area. Abbott is a World War II veteran, who was awarded two Purple Hearts as an infantryman. He dedicates his charity in memory of his late wife, Maureen.

“She tried to help as many poor and homeless people as she could. When I lost her, I decided the best tribute to her would be a full-time program in her name,” Abbott explained.

But Abbott’s mission to care for the homeless met an obstacle after the city government of Fort Lauderdale passed an ordinance which placed restrictions on feeding the homeless.

According to NBC News, this is the fourth such ordinance Fort Lauderdale has passed related to the problem of homelessness, and the latest addition restricts how these individuals are fed:

The ordinance requires groups handing out food to homeless to be at least 500 feet away from residential properties. It limits feeding sites for homeless to one in any given city block, and prevent feeding sites from being within 500 feet of each other.

Abbott was certainly aware of the new law and made an affirmative decision to ignore it and continue his work to feed the homeless anyway, so in that sense Abbott is different from many other victims of overcriminalization. Two days after the ordinance took effect, Abbott was charged along with two other pastors with willful violation of a city ordinance. If convicted, the punishment for this violation is 60 days in jail and a $500 fine.

Threats of imprisonment did not hold Abbott back from continuing his charity. “I know that I will be arrested again, and I am prepared for that. I am my brother’s keeper, and what they are doing is just heartless,” he stated.

The ordinance allows for legal, clean and safe distribution of food to the homeless. For example, if a minister, priest or member of clergy wishes to provide food to the homeless at their establishment (i.e., community hall, church or gathering place) they can do so if the proper facilities, as listed in the ordinance, are in place.

While there could be a rational basis for this city government to restrict the place and manner of feeding homeless people (such as overcrowding in public spaces, sanitary concerns or security considerations), the punishment for violating the ordinance goes way too far.

There is no question that Abbott is aware of the consequences of what he is doing; nonetheless, imposing criminal penalties on acts of charity is a disturbing. Instead of addressing violations of such an ordinance through civil fines, the Fort Lauderdale government has unwisely chosen to treat charity as a criminal activity.

Arnold Abbott instead seeks to live out the mission by which his non-profit is named, to love thy neighbor. “I don’t do things to purposefully aggravate the situation,” he said. “I’m trying to work with the city. Any human has the right to help his fellow man.”

Given the harsh penalties Abbott faces for giving food to the hungry, one may ask whether Jesus would have been arrested for handing out loaves of bread and fish to those who were hungry.