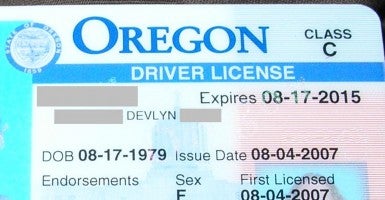 At the polls Tuesday, Oregon voters overwhelmingly rejected a law passed by the state legislature last April that granted driver’s licenses to illegal immigrants residing in the state.

The measure was put to voters after Oregonians for Immigration Reform, an immigration enforcement group opposed to the driver’s license benefit, initiated a citizen’s referendum and successfully collected the 50,000 signatures required to get it on the ballot. Voters rejected it by a margin of 68 percent to 33 percent.

“The ballot measure was a direct response to the legislature moving forward to providing driver’s licenses on its own,” Jon Feere, a legal policy analyst at the Center for Immigration Studies, told The Daily Signal.

Oregon’s Measure 88 allowed undocumented immigrants to obtain a driver’s license, valid for four years, without having to provide “proof of legal presence in the United States.”

According to Feere, supporters of the driver’s card benefit spent more than 11 times as much money as their opponents. Despite outspending the opposition and having the support of influential groups such as the Service Employees International Union, advocates of the benefit lost soundly on Election Day.

In the last year, state legislators in Colorado and California passed laws permitting non-citizen residents to obtain driver’s licenses. However, if both states put the benefit to a vote, Feere believes residents would ultimately repeal it.

Prior to knowing the election results, Feere predicted that Oregon’s outcome could determine how other states handle similar legislation going forward.

“It is very much a possibility that if Oregonians come out against driver’s licenses we will see other states follow Oregon’s lead,” said Feere. “California recently granted driver’s licenses to illegal immigrants, but I believe that if put up to a vote Californians would be vehemently against it.”

With President Obama expected to take executive action on immigration reform in the coming weeks, Feere says it’s crucial that states determine how they will respond to a potential amnesty.

“States really have to decide if they’re on the side of law-abiding immigrants or whether they want to encourage more illegal immigration to their jurisdiction,” said Feere.