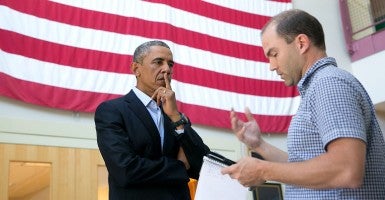 A group of Senate conservatives vowed to “use all procedural means necessary” to fight back against President Obama’s use of executive action to grant amnesty to illegal immigrants.

Despite yesterday’s electoral losses, Obama is reportedly moving forward with an immigration plan before the end of the year. In a letter today to outgoing Senate Majority Leader Harry Reid, D-Nev., the six senators expressed their concern over Obama’s vow to take executive action.

According to the letter, such action would “lawlessly grant amnesty to immigrants who have entered the country illegally.”

According to The Washington Post, while the president was speaking at the Congressional Hispanic Caucus Institute Gala last month, he said:

“But if anybody wants to know where my heart is or whether I want to have this fight, let me put those questions to rest right now. I am not going to give up this fight until it gets done. … I want to make something clear: Fixing our broken immigration system is one more, big thing that we have to do and that we will do.”

The Washington Post went on to write that the president “laid blame squarely at the feet of congressional Republicans” for failing to pass immigration reform.

In their letter to Reid, the lawmakers threatened to use Senate rules to take action against Obama. Read the full text below.

We write to express our alarm with President Obama’s announced intention to take unilateral executive action by the end of this year to lawlessly grant amnesty to immigrants who have entered the country illegally.  The Supreme Court has recognized that “over no conceivable subject is the power of Congress more complete” than its power over immigration.  Therefore, President Obama will be exercising powers properly belonging to Congress if he makes good on his threat.  This will create a constitutional crisis that demands action by Congress to restore the separation of powers.

As majority leader of the Senate, you have the responsibility of not only representing the citizens of your State, but also of protecting the Constitution through vigilant exercise of the checks and balances provided under the Constitution.  Therefore, we write to offer our full assistance in ensuring expeditious Senate debate and passage for a measure that preserves the power of Congress by blocking any action the President may take to violate the Constitution and unilaterally grant amnesty; however, should you decline to defend the Senate and the Constitution from executive overreach, the undersigned Senators will use all procedural means necessary to return the Senate’s focus during the lame duck session to resolving the constitutional crisis created by President Obama’s lawless amnesty.