Will Burke Victory Mean a Higher Minimum Wage in Wisconsin? Not Necessarily. 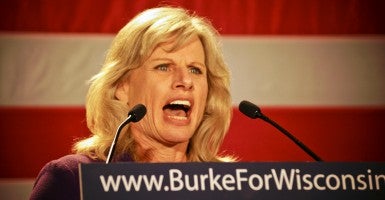 But some political and legal experts say there’s no guarantee Wisconsin will see a higher minimum wage if Burke is elected.

Although Burke has said she supports raising the hourly minimum wage from $7.25 to $10.10 in three steps, Wisconsin’s governor generally can authorize a pay hike only if the legislature first passes a bill that calls for it, according to Marquette University political science professor John McAdams.

But the legislature, under a Republican majority for the past several years, hasn’t been receptive to overtures about increasing the minimum wage. The GOP is expected to keep control of the Assembly and Senate after Tuesday’s election.

“Unless the Democrats take the Assembly and the Senate and Burke wins the governorship … the state is not going to have a minimum wage higher than the federal minimum wage,” McAdams said.

But Wisconsin Jobs Now, which has received at least $2.5 million from Service Employees International Union organizations since 2011, is trying to skirt the legislature by claiming the Walker administration is violating a 1913 state law that requires the minimum wage to be “not less than a living wage.”

Wisconsin Jobs Now and three low-wage workers filed a lawsuit, Oct. 27, against Walker in Dane County Circuit Court to try to force him to unilaterally raise the minimum wage. Walker repeatedly has said he’s opposed to an increase and instead wants to focus on creating jobs that pay two or three times $7.25 an hour.

The Wisconsin Department of Workforce Development on Oct. 6 rejected complaints for a higher minimum wage from the SEIU front group and close to 100 workers because the state agency found “no reasonable cause to believe that the wages paid to the complainants are not a living wage.”

“Most of the complainants who are arguing the minimum wage is not a living wage are making more than the minimum wage—up to $15.07 an hour,” DWD spokesman John Dipko said.