From In-N-Out Burger to Nilla Wafers, Here’s How Politicians Are Spending Election Night 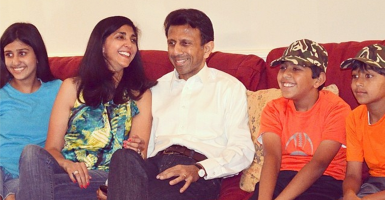 Some of them went from town to town, campaigning as the clear underdog.

Others, not up for re-election, used their political clout to elevate U.S. Senate hopefuls from state to state.

A few laid low, allowing tensions on the Left to steer the momentum of the midterm elections. And some went big, spending millions of dollars to secure a seat in the Senate.

Tonight, they have one thing in common: They wait.

As the election results roll in, politicians sit tight with the rest of America, waiting for news anchors to call the winners and losers of the 2014 midterm elections. Pressure is on for Republicans to flip the balance of power and regain control of the Senate, but polls guaranteed some close races.

As the hours ticked down, The Daily Signal asked some politicians to share how they planned to spend Election Night, whether rallying last-minute voters, attending Mass or stopping by a burger joint for some good-luck grub.

House Majority Kevin McCarthy, R-Calif. It’s an Election Day tradition for the McCarthy family to go out to eat at In-N-Out Burger.

A photo posted by Congressman Jim Bridenstine (@repjbridenstine) on Nov 11, 2014 at 9:40am PST

U.S. Rep. Jim Bridenstine. R-Okla.
This morning Bridenstine attended the Vera Breakfast in Vera, Okla., hosted regularly by Oklahoma state Rep. Earl Sears for community leaders from miles around. Location: “the Vera Bait Shop and Grill in this tiny town (population 246) out in the middle of nowhere,” a Bridenstine aide says. “Policy, legislative issues, and where the bass are biting are regularly discussed. It’s the hot ticket and probably doubles the annual revenue at the Bait Shop. Really, this place is further from nowhere than you’ve ever been!”

Louisiana Gov. Bobby Jindal “It’s a little different every year, but we usually watch the returns come in while my kids give their take on the races — it’s pretty funny to hear what kids think of politics. There’s also a large plate of chocolate chip cookies involved.”

Rep. Kevin Brady, R-Texas
“I always spend the last few hours of Election Day at my home precinct, greeting voters, usually with one of my sons along. It’s a tradition, and a great way to finish a race.”

Sean Haugh, Libertarian candidate for Senate, N.C. “Up at 6.30 a.m. for radio and other phone interviews, and then to my weekly meeting at Satisfaction restaurant (I do expect it will be better attended than usual). Nothing special, just a normal day. ;)”

Alex Mooney, Republican candidate for U.S. House, W.Va.
Mooney spent Election Day knocking on doors of undecided voters in his home county, calling voters across the district and sign-waving during rush hours in West Virginia’s eastern panhandle. With family, he went to vote in the morning and he’ll see them again after polls close in the evening. The Mooneys also will attend Mass and pray.

David Patterson, Libertarian candidate for Senate, Ky.
“I wish I could think of some good things, but this is my first election, and I am planning on relaxing at home with my family and watching the results on TV.”

Sen. Ted Cruz, R-Texas Cruz will head to the ACL Theatre in Austin tonight along with Gov. Rick Perry, Sen. John Cornyn, R-Texas, land commissioner hopeful George P. Bush, former Florida Gov. Jeb Bush and Greg Abbott, the Republican candidate for Texas governor. Abbott is a good friend and former boss of Cruz’s, so the senator looks forward to celebrating his expected victory with a crowd of about 1,000. Also on tap: 1,200 balloons and the Pat Green Band.

Rep. Tim Huelskamp, R-Kansas
“My normal election routine is to begin the day at Catholic Mass with my family. Then I spend much of the rest of the day contacting voters through social media or on the phone.”

Rep. Stephen Fincher, R-Tenn. “Usually I get up in the morning and pray that I win — we’ve got to get that out of the way first! I’m from a small community, so then I go to the corner store and get a sausage and biscuit. During the day we’ll visit folks, reflect and think about all the things we did right to win. If that happens, after our election night gathering, I will have a bowl of ice cream and Nilla Wafers to celebrate.”

Just a little over 3 hours left before the polls close – let’s do this Louisiana! #tcot#lasen#DefeatLandrieupic.twitter.com/qT6A2NJRvl

Col. Rob Maness, Republican candidate for Senate, La.
“I don’t have any traditions, but I think I like the idea of having election parties at fun places. That’s why we’re at Rock ‘n’ Bowl in New Orleans tonight. One tradition I know we’ll have is to pray with my family for the troops in harms way defending American’s right to exercise the vote.”