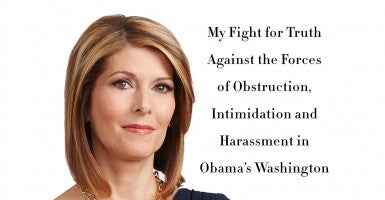 Sharyl Attkisson has been called a “pit bull” by former bosses and “unreasonable” by top Obama administration officials. The veteran investigative reporter isn’t known for backing down from a story — even when faced with hacked computers, screaming flacks and suspicious cables.

Attkisson’s new book, “Stonewalled: My Fight for Truth Against the Forces of Obstruction, Intimidation, and Harassment in Obama’s Washington” (Harper), doesn’t come out until Nov. 4. But tantalizing excerpts obtained by the  Washington Post and New York Post have caused a stir as they make their way around the Washington, D.C., media circuit.

Here are five anecdotes detailing some of the “intimidation, obstruction and harassment” that Attkisson — the former CBS News correspondent who currently is a senior independent contributor to The Daily Signal — encountered on the job.

1. A mysterious computer hacking. Early one morning at a time when Attkisson was reporting on the 2012 terrorist attacks in Benghazi, she woke up to hear her Apple computer making a strange noise. It sounded  like the one made a day earlier by her Toshiba laptop from CBS News.

So she had  the computer checked out by “Number One,” who she describes as a “confidential source inside the government.”

Number One told Attkisson that her computer had been breached. The origin: a “sophisticated entity that used commercial, nonattributable spyware that’s proprietary to a government agency: either the CIA, FBI, the Defense Intelligence Agency or the National Security Agency.”

At one point, an intruder or intruders obtained Attkisson’s Skype handle and password, and activated the audio–making “heavy use of it, presumably as a listening tool.”

Number One also found three classified documents buried on her computer. Attkisson writes that she had no idea they were there.

>>> Journalist: Obama Administration More ‘Restrictive’ and ‘Dangerous’ Than Any in History

Her computer troubles don’t end there. While preparing for an interview with Thomas Pickering, who served as chairman of the Benghazi Accountability Review Board, she watched as data began disappearing before her eyes, “deleted line by line in a split second.”

Don Allison, a security specialist at Kore Logic, examined Attkisson’s iMac and found “key evidence of a government computer connection” to her computer.

2. An extra fiber-optic line. Besides the computers, Attkisson ran into problems with her telephones, television and alarm system — all run on Verizon’s FiOS system.

She enlisted the help of “Jeff” to determine what was wrong with her phones and computers. He looked around the outside of her house and something caught his eye: Dangling from the FiOS box affixed to a brick wall was a stray fiber-optic line used to download data and send it away.

Attkisson took a picture of the cable and called Verizon, whose customer service reps said they didn’t install it. Verizon instructed the reporter to report it to police, then called back to tell her they wanted to look themselves.

“That shouldn’t be there,” said the technician who visited Attkisson’s home on New Year’s Day.

Attkisson had the Verizon employee leave the cable on top of the air-conditioning fan. Several days later, she asked her husband to go get it. The cable was gone.

3. CBS News and the Benghazi attacks. The day after the Sept. 11, 2012, attacks on the U.S. consulate in Benghazi, Libya, CBS News’ “60 Minutes” conducted an interview with President Obama. During the interview, Obama told correspondent Steve Kroft that it was “too early to know” whether it was a terrorist attack.

That part of the exchange, however, aired only days before the November 2012 presidential election.

Before the Oct. 16 presidential debate between Obama and Republican nominee Mitt Romney, the White House worked to convince Americans that the president specifically referred to Benghazi as terrorism.  A White House official called Attkisson to tell her Obama had referred to a “terrorist attack” in his Sept. 12 statement in the Rose Garden — when he did use the phrase “no act of terror.”

“I had no idea that the question of how the administration portrayed the attacks — and whether it was covering up the terrorist ties — would emerge as a touchstone leading up to the election,” Attkisson writes. “But the White House already seemed to know.”

She recalls occasions when CBS officials in New York inserted a line in “CBS Evening News” stories implying that Obama called the events in Benghazi a terrorist attack on Sept. 12.

“It seems as though they’re putting a lot of effort into trying to defend the president on this point,” she writes.

Later, Attkisson learned what the president had told her colleague,  Kroft, during his Sept. 12 “60 Minutes” interview.  The full transcript, however, had been emailed to “CBS Evening News” offices in New York that same day.

“I feared that we’d once again mischaracterized facts in advance of a presidential election to hurt a Republican,” Attkisson writes. “We not only had stood by silently as the media largely sided against Romney, but we’d also taken an active part in steering them in that direction.”

4. Ties between CBS and the administration. The White House made it known when it didn’t like Attkisson’s reporting — and often went to the head honcho, CBS News President David Rhodes, the New York Post notes.

Typically, a White House flack upset with her work would  email both Rhodes and his brother, Ben, a top national security adviser to Obama.

Attkisson recalls lining up an exclusive interview with Nakoula Basseley Nakoula, creator of a YouTube video about Islam for which then-Secretary of State Hillary Clinton blamed the Benghazi attacks. David Rhodes shot down her idea.

Similarly, Attkisson found stories were watered down or nixed because of potential, even loose, ties to the Obama administration. One story on school-lunch fraud had nothing to do with first lady Michelle Obama, but was ultimately cut. Another report on waste at the Department of Housing and Urban Development turned into a “bland non-story” before it aired.

5. Liberal bias from the mainstream media. During her reporting on Benghazi, Attkisson ran into criticism from high-ranking Obama administration officials. In one exchange with national security spokesman Tommy Vietor, she asked for more information about reinforcements sent to Benghazi.

“I give up, Sharyl,” she says Vietor told her. “I’ll work with more reasonable folks that follow up, I guess.”

Attkisson got a similar response from Eric Schultz, principal deputy press secretary, when she asked him about the “Fast and Furious” scandal.

Schultz cursed at her,  saying:

One boss at CBS, she writes, said analysts with a conservative perspective should be labeled as “conservatives.” Liberal analysts, though, were just “analysts.”

Attkisson points to bias in some outlets’ reporting of the number of Americans enrolled in Obamacare:

Many in the media … are wrestling with their own souls. They know that Obamacare is in serious trouble, but they’re conflicted about reporting that. Some worry that the news coverage will hurt a cause that they personally believe in. They’re all too eager to dismiss damaging documentary evidence while embracing, sometimes unquestioningly, the Obama administration’s ever-evolving and unproven explanations.