City Says Ministers Don’t Have to Wed Same-Sex Couples, but Here’s Why It’s Not Over Yet 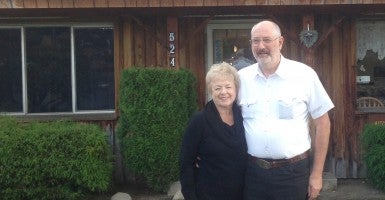 An Idaho town is not going to force a Christian ministry couple who own a wedding chapel to perform same-sex marriages there, the town’s chief attorney told The Daily Signal.

A lawsuit filed against the town by the ordained ministers to protect themselves from prosecution was based on “a misperception,” City Attorney Michael C. Gridley said, and he had no intentions of “threatening” and “imprisoning” them.

With these conciliatory words, Coeur d’Alene, Idaho, backed off enforcing its nondiscrimination ordinance against the ministers, Donald and Evelyn Knapp. The move would have subjected the couple to thousands of dollars in fines and up to six months behind bars for declining to perform gay and lesbian wedding ceremonies at their Hitching Post Lakeside Wedding Chapel. Coeur d’Alene, Idaho is located near the border of Washington state.

In a letter to the Knapps’ lawyer dated Oct. 23,  Gridley sought to “clarify” the town’s earlier stand in response to the couple’s lawsuit and motion for a temporary restraining order. He wrote:

[I]t is my opinion and the city’s position that as currently represented, the conduct by Hitching Post Weddings LLC is exempt from the requirements of the ordinance and would not be subject to prosecution under the ordinance if a complaint was received by the city.

Don and Lynn Knapp, who are Pentecostal ministers, have been married for 47 years. The couple, who have  owned the Hitching Post chapel in Coeur d’Alene since 1989, say their wedding ceremonies follow the teachings of the Bible, “which makes clear that marriage is between a man and a woman.” Hitching Post Lakeside Wedding Chapel has been part of the regional experience since 1919.

The Knapps sued the city on Oct. 17, 10 days after the 9th U.S. Circuit Court of Appeals declared gay marriage legal in Idaho.

Already, one same-sex couple had inquired about holding a wedding at their Hitching Post chapel.

Critics called the lawsuit “totally false” and “ridiculous,” saying the Knapps were already exempt from the nondiscrimination law, which states that places of “public accommodation” such as restaurants and hotels must offer services equally regardless of a person’s sexual orientation.

Gridley, the city attorney, now concedes that officials may have sent mixed messages to the Knapps.

How the Story Unfolded

In multiple interviews last spring, another attorney for Coeur d’Alene said the Knapps would be subject to the nondiscrimination law pending an appeal of a federal judge’s ruling against the Idaho law affirming marriage as between a man and  a woman.

“I would think that the Hitching Post would probably be considered a place of public accommodation that would be subject to the ordinance,” Deputy City Attorney Warren Wilson told The Spokesman-Review newspaper.

In an interview with KXLY, a local ABC television affiliate, Wilson also said:

For-profit wedding chapels are in a position now where last week the ban would have prevented them from performing gay marriages, this week gay marriages are legal, pending an appeal to the 9th Circuit.

If you turn away a gay couple, refuse to provide services for them, then in theory you violated our code and you’re looking at a potential misdemeanor citation.

If you turn away a gay couple, then in theory you violated our code.–attorney for Coeur d’Alene

So on Oct. 17, when a same-sex couple asked the Knapps about holding their wedding at Hitching Post, the ministers went on the offense.

Of that decision, Don Knapp told The Daily Signal in an interview via email last week:

Represented by a lawyer associated with Alliance Defending Freedom, the Knapps filed suit to prevent officials of Coeur d’Alene from prosecuting them for declining to violate their religious beliefs about marriage.

The lawsuit follows several cases that have drawn national attention because a government agency moved against a private business owner for acting on their religious beliefs that marriage is the union of a man and woman.

Hours after filing suit, the Knapps — ordained by a Pentecostal denomination called the International Church of the Foursquare Gospel — received another request to hold a same-sex ceremony, this time from a couple in Boston.

This put them at risk of being prosecuted over saying no to a second couple, meaning more fines and more jail time, said Jeremy Tedesco, the Knapps’ lawyer with Alliance Defending Freedom. Lake Coeur d’Alene, Idaho, is a popular summer destination in the Pacific Northwest.

Tedesco told The Daily Signal that the lawsuit isn’t pre-emptive because the city made clear on three occasions that if the Hitching Post were to decline to perform same-sex weddings, the Knapps would be in violation of the law and subject to criminal prosecution.

The city’s first response was a letter dated  Oct. 20. In it, Gridley writes that the Knapps would be exempt from the law if they were running a nonprofit religious corporation:

If [the Knapps] are operating as a legitimate not-for-profit religious corporation then they are exempt from the ordinance like any other church or religious association. On the other hand, if [the Knapps] are providing services primarily or substantially for profit andthey discriminate in providing those services based on sexual orientation then they would likely be in violation of the ordinance.

Hitching Post has been a for-profit wedding chapel since they opened it 25 years ago, the Knapps say.

The city’s distinction between for-profit and nonprofit distinction “should not come as any surprise,” Tedesco said in an email to The Daily Signal:

The left’s unequivocal (and incorrect) position is that for-profit companies cannot exercise religion, and thus are not entitled to any religious exemptions in these types of nondiscrimination laws. The city consistently expressed this same position before and after we filed suit. But the massive public outcry has pressured the city to alter its position and recognize that people do not abandon their faith when they open a business.

Later in the Oct. 20 letter, Gridley told the Knapps there was another way they could be exempt from the law: the First Amendment.

[S]ection 9.56.040 of the anti-discrimination ordinance states that the ordinance ‘shall be construed and applied in a manner consistent with the First Amendment jurisprudence regarding the freedom of speech and exercise of religion.’

Tedesco said he was pleased to see the city backing off enforcement, but its response was insufficient to settle the case.

“To resolve the broader religious freedom problem with the ordinance, the city should amend it so that it is clear that the religious exemption covers for-profits, like the Hitching Post,” he said. “It is a fundamental violation of due process for the city to leave people guessing as to whether they will be subject to the criminal penalties set out in the ordinance.”

Gridley’s follow-up letter Oct. 23, meant to “clarify” the city’s stance, does not say all for-profit religious corporations are protected from prosecution — only Hitching Post. Don and Lynn Knapp are ordained Pentecostal ministers who have been married for 47 years.

In a telephone interview with The Daily Signal late Tuesday, Gridley said town officials are talking about changing language in the law. As written, he said he realized upon review,  it “makes no distinction between profit and not.”

It’s not my place to add that [interpretation regarding for-profit enterprises] onto that ordinance, so that’s why I sent the letter correcting or clarifying … that a religious corporation would be exempt from this ordinance, whether they are for profit or not.

Gridley also said town officials were not maliciously targeting the Knapps. He said:

I think there was a misperception that we were threatening the Knapps, that we were imprisoning ministers, and all that kind of stuff, and we’re really not. We have not gone there, we have not threatened anybody.