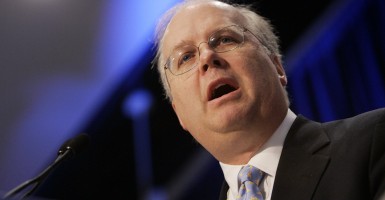 Karl Rove’s support for what many Americans consider amnesty for illegal immigrants has put the Republican political guru at odds with The Heritage Foundation for a decade.

That’s why observers of current and past incarnations of “immigration reform” were surprised to learn of Rove’s association with a campaign ad drawing attention in a hot U.S. Senate race.

The 30-second ad was paid for by American Crossroads, a political action group largely financed by Rove, best known as chief political aide to President George W. Bush. The ad, which first aired early this month, cites a Heritage Foundation report last year on the fiscal costs of amnesty in attacking the Democratic candidate in Iowa for supporting “immigration amnesty.”

That is, the same Karl Rove who has argued against using the word amnesty to refer to legalizing illegal immigrants also raised funds to pay for the ad that accuses Rep. Bruce Braley, in a tight race with Republican Joni Ernst, of favoring … amnesty.

It’s not news that amnesty is bad policy and bad politics—conservatives have been making that case for a decade. Apparently Rove now agrees. So the only question is whether the GOP will govern in 2015 the way they campaigned in 2014.

The think tank’s report documented the hundreds of billions in ever-rising cost to taxpayers of granting citizenship to millions who broke the law to come or stay here.

Rove was among amnesty backers who sought to marginalize the Heritage research paper, published May 6, 2013, which the anti-Braley ad cites.

The American Crossroads ad opens with criticism of Braley’s support for Obamacare, saying the legislation cut “over $700 billion from Medicare” and “caused Iowans to receive insurance cancellation notices.”

At 15 seconds, the narrator asks: “Why does Braley keep voting with Obama and support immigration amnesty giving those lawbreakers access to food stamps and Medicare?”

The citation “The Heritage Foundation, 5/6/13” appears on the screen in small print after the words: “Bruce Braley: Giving Lawbreakers Food Stamps and Medicare.”

It’s just a little jarring to see this message coming from American Crossroads. Karl Rove, who raises funds for the group, has spent more than a decade telling Republicans that they need to be careful about how they discuss immigration if they want to win Hispanic votes. “It is … important that Republicans avoid calling a pathway to citizenship ‘amnesty,’ ” Rove wrote a year ago [in the Wall Street Journal]. And here’s Crossroads, telling Iowans that any pathway to citizenship is amnesty. It’s a long, long way from the Bush presidential campaigns.

Last year, at the height of the immigration debate, Rove got a rejoinder from Heritage’s Edwin Meese in the Wall Street Journal over what the word “amnesty” meant to President Reagan, whom Meese served as attorney general among other roles.

>>> Has Obama Enforced Immigration Laws? It’s All in How You Count

The Daily Signal was not able to reach Rove for comment on the ad. Paul Lindsay, communications director of American Crossroads, was not immediately available for comment.

Lindsay confirmed to Talking Points Memo, however, that the ad purposefully cited the Heritage report on the costs of granting amnesty to millions of illegal immigrants.

Rove has seen eye to eye with The Heritage Foundation on other policy issues over the years. His campaign and White House experience also made him a popular speaker at Heritage membership events after Bush left office.

In 2006, however, during Bush’s second term, Rove also assailed a Heritage paper on the scope and cost of amnesty that ended up torpedoing the immigration reform package supported that year by Bush and key members of Congress.

Robert Rector, Heritage’s senior research fellow in domestic policy, was the main author of both the 2006 and 2013 papers.

Braley’s campaign website, in a write-up on the ad, repeats incorrect assertions by left-leaning media organizations that Heritage disavowed Rector’s 2013 report and that the paper had been “debunked.”

In fact, Rector briefed scores of House and Senate members and their staffers on his findings, as National Journal reported at the time:

[Rector] has tangled with lawmakers, schooled young staffers, and been skewered by opposing policy analysts. And in the process, Rector has become the most influential outside player on what is perhaps the defining issue of the 113th Congress.

Rector said of lawmakers in an interview with National Journal in June 2013:

The problem is, they are trying to move the bill so fast that no one can really understand what the issues are. There’s not a lot of understanding of the issues, and what I perceive is kind of  a race to get this bill passed before anyone really understands what its consequences are.