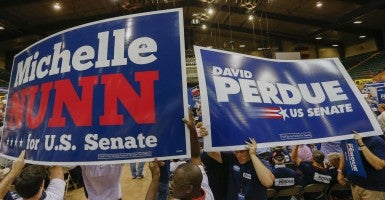 Polls show Georgia's Senate race so tight that it's bound to go to a runoff in January. (Photo: Newscom)

The U.S. Senate race in Georgia was supposed to be a gimme for Republicans. After all, it’s a reliably red state in the Deep South.

Instead, polling now suggests an extremely tight contest, raising the possibility of a runoff election in January if neither candidate can get 50 percent of the vote a week from today–and perhaps leaving control of the Senate in doubt.

Perdue’s first cousin, Sonny, is a former governor of Georgia. Nunn’s father, Sam, is one of the last Georgia Democrats to serve a full term in the Senate.

“We have this crazy runoff law, and the race is close enough that I’m not sure if we’ll get an answer in November or January,” says Eric Tanenblatt, a longtime GOP strategist and fundraiser who was chairman of Mitt Romney’s campaign in Georgia in both 2008 and 2012.

When Sen. Saxby Chambliss, a Republican, announced his retirement last year, few thought his Georgia seat would remain in play a week before Election Day.

But today, an air of uneasiness follows Georgia, the state with the nation’s highest unemployment rate.

Keith Mason, the head of a pro-Nunn Super PAC, Georgians Together, says it’s “unlikely” a candidate will win the Senate seat without a runoff.

Mason and Tanenblatt, who shared their perspectives on the Nunn-Perdue contest with The Daily Signal, are Atlanta-based political operatives with opposing views. They both work at the same law firm: McKenna Long & Aldridge.

In recent weeks, Perdue, who campaigns as an outsider with experience leading businesses, has been forced to defend that supposed strength as the Nunn campaign criticizes his record on outsourcing jobs.

Tanenblatt calls those claims “twisted” and predicts the race will turn on whether Democrats can turn out minority voters.

Perdue, a former chief executive of Reebok and Dollar General, told reporters two weeks ago that he was “proud” of using outsourcing as a tactic to turn around troubled companies. Republican Senate candidate David Perdue arrives for a rally before a debate at the Georgia National Fair. (Photo: Newscom)

Nunn’s attacks focus on Perdue’s work for Pillowtex, a North Carolina-based textile company that he led shortly before it went out of business, laying off thousands of workers.

Her argument gained momentum in early October when Politico published a 2005 deposition Perdue gave in lawsuits stemming from the Pillowtex closure.

Asked about his “experience with outsourcing,” Perdue replied: “Yeah, I spent most of my career doing that.”

“Perdue doesn’t care about people like me and you, that’s for sure,” says Mason, who worked for Al Gore’s presidential campaign in 2000 and volunteered for Sam Nunn while in middle school. “That is, unless they’re bringing him a cup of coffee. Ordinary people don’t view him as an ally.”

Keith Mason says David Perdue “doesn’t care about people like me and you.”

Blunt accusations aside, the rhetoric hasn’t been overly partisan because both candidates lack voting records.

Nunn has branded herself as a bipartisan candidate whose experience running a nonprofit founded by a Republican president, George H.W. Bush, shows she can work with both sides of the political divide. Despite Nunn’s work with Points of Light, the service organization he established, the elder Bush endorsed Perdue. The former president’s team has asked her to stop citing their connection.

“Michelle [Nunn] has been more clear about committing to bipartisan solutions. Perdue sounds like every Republican candidate with no hint of a desire to cooperate.  He is all about continuing another fight.”

Tanenblatt counters: “Michelle has tried to run as a bipartisan consensus builder. But she can’t be deceptive. She’s a Democrat.”

The Key: Who Will Vote?

According to Yahoo! News, new voter registration figures show the overall electorate in Georgia is slightly smaller than in 2012, with whites making up 58 percent of the roughly 6 million voters.

Meanwhile, Mason says, two-thirds of new registered voters are black. He estimates that blacks make up about 30 percent of the electorate.

“Democrats have had a very organized effort the last few years to register new voters among minorities. The question, and the key to the race, is: Do they turn out to vote?”

Nunn, he argues, also will have to woo independents and moderate Republicans, two groups that may interpret her message differently than do black Democrats.

“The challenge for Nunn is to get them [black voters] energized, while also appealing to independents,” Tanenblatt says. “Black voters are one of the few groups still sticking with the president, but independents are not. So she’s walking a fine line.”

Charlie Harper, editor-in-chief of Peach Pundit, a Georgia-based politics website, says Nunn has a two-pronged strategy that aims to take advantage of her father’s popularity.

“People are being reminded that they like that Nunn guy. Nunn was popularly seen as the last of the conservative Democrats. It gives her credentials as a centrist, old Southern Democrat, even if she runs more in line with how the mainstream party wants.”

The link helps Nunn reach beyond her Democratic base and appeal to independents and more liberal Republicans. But can she appease each of those constituencies?

“There are two parts to her strategy: To motivate the traditional voter who only shows up during presidential years, together with openly branding herself as very moderate,” Harper says. “Which Michelle Nunn is she?”

If Democrats do get their desired turnout, Tanenblatt, Mason and Harper agree the race will be decided in a runoff.

In that case, Mason thinks Nunn will win, but Tanenblatt favors Perdue.

It all adds up to uncertainty.