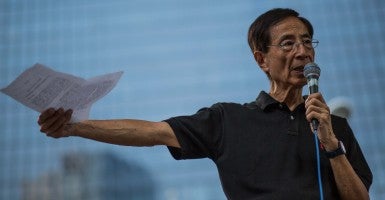 Until he was the target of tear gas recently during protests, Martin Lee, founding chairman of the Democratic Party of Hong Kong, knew his city only as peaceful.

The aggressive actions by Hong Kong police threatened to undo the elegant image of the city. But the student protesters have made it a point to act civilly, shielding themselves with nothing more than umbrellas and picking up litter in the streets they occupy.

Hong Kong leaders, in their first conciliatory gesture, held a televised debate Tuesday with the protesters. Government leaders said they were willing to submit a report to China’s capital, Beijing, acknowledging the surge of public discontent that emerged from the protests.

Lee, in an exclusive interview the next day via Skype, told The Daily Signal that the report to the Communist regime should be easy to make.

“The whole world has seen how peaceful the protesters have been,” Lee said.

“He should be proud of the Hong Kong people. He should explain to Beijing that you have nothing to fear from these people.”

Beijing “has nothing to fear” of the Hong Kong protesters, says Martin Lee.

At the same time, Lee was critical of President Obama for being “very quiet” about the struggle for free elections in Hong Kong.

“I thought the foreign policy of your administration was one of supporting democracy and rule of law,” Lee said.

Although the Hong Kong government made no promises and showed no signs of giving in to the students’ primary demands, Lee said, the prime-time talks provide positive momentum for the democracy movement.

At least it’s something positive. It’s not much, but it’s a step. Obviously no one expected a full agreement. One good thing is that until then, the government took a very firm line that they would not climb down from. The students wanted some conciliatory move that showed there’s goodwill. ‘I’m not sure why the U.S. government has been very quiet,’ Martin Lee says. (Photo courtesy Martin Lee)

‘One of the Most Stupid Comments’

At 76, Lee, a veteran lawyer and politician, remains a powerful voice and champion of democracy.

Though he doesn’t directly advise the students, earlier this year Lee befriended 17-year-old Joshua Wong, the public face of the student protest movement. On Sept. 28, Lee was giving a speech to the demonstrators when police launched tear gas at the crowd.

During a wide-ranging interview, Lee was sharply critical of the United States and Britain for not acting forcefully enough in support of Hong Kong:

If the British government doesn’t want to get involved, they are obviously putting money before honor. Hong Kong is a great embarrassment to China trade. I’m also not sure why the U.S. government has been very quiet. I thought the foreign policy of your administration was one of supporting democracy and rule of law.

In his first interview with foreign press since protests began, Leung told reporters that free elections to choose his successor would give poor people too much of a voice in politics.

“It was one of the most stupid comments,” Lee said, adding:

He hasn’t been making many intelligent comments. A huge sector of the community turned against him. A lot of people in Hong Kong make less than $1,800 per month. He’s saying these people are not fit to govern Hong Kong. It’s very insulting. Hong Kong, known for high property prices, also has one of the world’s biggest wealth gaps. Both factors have inspired the student protesters.

Demonstrators have demanded Leung’s resignation and insisted on the democratic election of his successors as well as all lawmakers.

The reform would allow voters, not a nominating committee aligned with Communist leadership in China, to pick candidates.

Since 1997, the year Britain handed over rule of Hong Kong to China, a 1,200-member “election committee” has picked the city’s leader every five years.

The committee is represented by four sectors of society, and the system’s defenders claim it gives voice to diverse occupations such as business, fishing and social work.

Some protesters and democracy advocates, including Lee, have expressed a willingness to compromise if Hong Kong reformed the composition of the proposed committee to make it more representative of the population.

“I don’t think the students insist on one model,” Lee said. “The general fear is that Beijing controls all the candidates. What’s the difference between a rotten orange, a rotten apple and a rotten banana?”

Lee says that because Hong Kong’s Basic Law, or mini-constitution, guarantees universal suffrage–the right to vote–a nominating committee should not be prescribed to the same four sectors of society. He said:

When we were promised universal suffrage, no one in Hong Kong thought it would be Bejing picking all the candidates, like Iran. It’s totally unacceptable to us. We’ve been waiting so many years.

Almost a month into the protests, the students continue to wait. They haven’t left the streets.

It’s difficult to predict how the stand-off might conclude, Lee says, but an escalation of police violence is not out of the question.

“The ultimate end game would be the removal of everybody by force,” Lee said. “They may try plastic bullets, which can kill people. Maybe they will use water cannons.”

Lee added that he doesn’t expect that outcome, or one similar to the bloody end of China’s Tiananmen Square protests in 1989, because China has matured since then. He said:

“In 1989, the Communist Party thought they would lose control of the entire country. There is no such worry now. China’s economy is strong. I don’t think think this will be a repeat of Tiananmen.”

If Leung refuses to resign as chief executive, Lee said, then Hong Kong’s leader must assert leadership in another way. Because the student protesters, ever peacefully, demand it.

“It’s a difficult position for everyone,” Lee said of the job of chief executive.

But there must be two-way traffic. Of course [Leung] has to say what Beijing wants, but he also must convey the feelings of Hong Kong to Beijing. He hasn’t said anything to advance the democracy of Hong Kong. That is his duty.