How Russia Is Using Propaganda 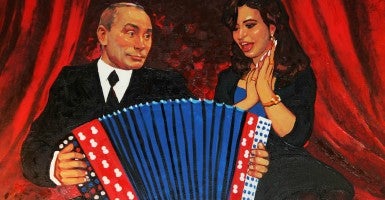 Russian military incursions into the airspace of NATO countries and submarine expeditions into Swedish territorial waters have intensified since its annexation of Crimea in March, as Moscow probes the weakness of European and U.S. responses.

Russia also has ramped up its advances on the information warfare front, aiming a barrage of propaganda at foreigners, particularly at Russian speakers living in its “near abroad.”

According to a new Heritage Issue Brief from the Margaret Thatcher Center for Freedom’s Daniel Kochis,

Russia has used propaganda to shape the battlefield and public opinion in Western democracies. American policymakers and the public should be aware of the pernicious effects of Russian propaganda and take steps to counter its impact.

At a recent conference of the Woodrow Wilson Center, “Promoting Free Media, Informing the 1989 Velvet revolution, and the Challenge Today,” speakers presented a dire picture of the state of media in Russia and Eurasia, including Ukraine, which leaves Russia’s neighbors vulnerable to its influence. According to Freedom House’s new “Press Freedom Survey 2014,” there has been a dramatic reversal of the trends over the past 10 years. This is true globally, but especially in Eurasia, the least-free region.

Under the direction of Vladimir Putin, Russia is drawing on the propaganda techniques of the Cold War. Moscow decides on a message, as in the case of Ukraine, then sends this out to an “army of officers” who disseminate it. The impact of Russian disinformation is felt throughout Central Europe and the international community. Putin has built a vast disinformation machine inside Russia that has influence within neighboring countries, particularly among Russian speakers in those countries.

Within Russia itself, media freedoms have eroded. Russia has enacted numerous media laws under Putin that criminalize libel (which has been used as a pretext to silence opposition journalists), restrict access, and otherwise curtail media freedoms. Russian journalists have been targeted with violence, even murder.

Recently, an independent TV channel was excluded from Russian cable/satellite programing; Russia is banning various channels and programs, including VOA.

What can the U.S. government do? It cannot fight propaganda with more propaganda. But it must be aggressive in the promotion of the truth, through broadcasting as well as the Internet. Unfortunately, as U.S. broadcasting capabilities in this region have eroded through budget cuts, it’s becoming more and more difficult to rely on partnerships with local media, even Russian television, to get fact-based programming to Russian audiences. Nevertheless, Russian military and informational advances must be countered.