Those Ebola Vaccines in Testing Now? You Can Thank Dick Cheney for That 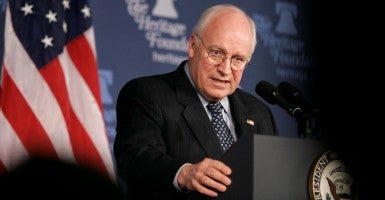 Democrats looking to blame Republicans for the lack of an Ebola vaccine may owe Dick Cheney an apology.

It turns out that as vice president, Cheney was the driving force behind more funding for the National Institutes of Health that helped lead to the development of Ebola vaccines being tested today.

From the time scientists first discovered the deadly virus in 1976 to 2012, two dozen outbreaks of Ebola claimed the lives of roughly 1,500 people–far less than the nearly 5,000 killed in the current outbreak in West Africa.

Bloomberg News reports that little money had been available to scientists to work on finding a cure to the disease. But after the terrorist attacks of September 11, 2001, Cheney, anticipating the potential for bioterrorist attacks, became the Bush White House’s point man advocating more spending to protect the nation from deadly pathogens.

It has ramifications when the source of the problem you’re dealing with is something like an outbreak of Ebola, but our prime motivation was to make certain we were prepared to deal with an attempt to use those substances in an attack.

Since 2001, the National Institutes of Health’s budget to study biodefense measures has increased from $53 million to $1.6 billion.

Of the drugs now in testing phases, including some to help Americans diagnosed with Ebola, seven were developed because of the additional resources made available after 9/11.

In 2004, Congress passed Project Bioshield, legislation that allocated $5.6 billion for purchasing, developing and storing drugs that could be used in the event of a bioterrorist attack. When President George W. Bush signed the bill into law, he commended Cheney for his role in its passage.

“I want to thank the vice president for his hard work,” Bush said during remarks in the Rose Garden. “He was the point man in the White House on this piece of legislation and did excellent work.”

In addition to Project Bioshield, the government boosted funding for basic research that runs high risks of failure. From 2000 to 2013, Ebola funding at NIH increased from $840,000 to $42.5 million.

>>> A Doctor’s Take: How Medical Professionals Can Lead on Ebola

One potential Ebola vaccine that grew out of the jump in funding was developed by Johnson & Johnson and is about to be tested on humans. In May, the company says, it will have 250,000 doses ready and another 1 million prepared next year.

Two vaccines being tested by NewLink Genetics Inc. and Profectus Biosciences were developed largely because of funding from the Department of Defense and NIH.

“[The government] did the best we could,” Cheney told Bloomberg. “It was all viewed as part of the cost of responding to 9/11 and the ongoing terrorism threat.”

>>> From Africa to the U.S.: Ebola in One Timeline