Bioterrorism Should Be a Bigger Concern Than Ebola 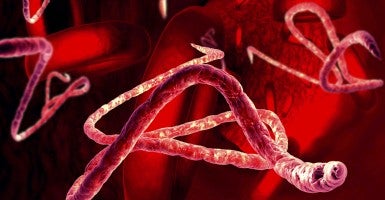 The Ebola virus has been headline news in America as of late. While it is a dangerous disease that Washington needs to take seriously, America could face even an even greater medical threat in the future: the threat of bioterrorism.

According to a recent article by Matt Mayer, chief operating officer of the Liberty Foundation of America and former Department of Homeland Security official, the U.S. has been fortunate no successful bioterrorist attacks have occurred on U.S. soil.

But terrorists’ inability to successfully attack to U.S. is not due to their lack of trying. Mayer mentions a laptop that was found in a raid in the Middle East several months ago, containing details on the use of biological weapons.

“Despite spending billions in the interim, the federal government and our health-care system remain unprepared,” writes Mayer. A successful bioterrorist attack could do more damage to the American populace than a virus that requires a lot of work to treat the infected and and to protect those with whom they have come into contact.

The threat of a bioterrorism attack is not a new concern for America – it was a high priority on past and present administrations’ to do lists. Jim Carafano, vice president for the Kathryn and Shelby Cullom Davis Institute for National Security and Foreign Policy at The Heritage Foundation, has previously mentioned the need for the administration to focus more assistance on establishing a “national bioterrorism watch system” and ensure the [U.S. military’s] Northern Command is fully prepared for any such events.

The Heritage Foundation will host an event that provides more information on the Ebola virus on Monday, Oct. 17 entitled Ebola: U.S. Domestic and Foreign Policy Options.