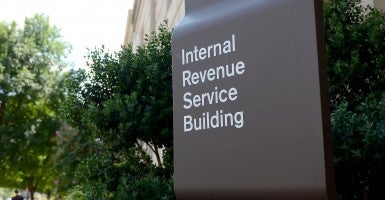 A federal judge in Washington, D.C., sided today with the Internal Revenue Service and dismissed lawsuits by tea party organizations seeking redress for improper delays and scrutiny of their applications for tax-exempt status.

District Judge Reggie B. Walton ruled that two lawsuits by True the Vote and Linchpins of Liberty, along with 41 other conservative organizations, were moot because the IRS took steps to address the scandal and “publicly suspended its targeting scheme.”’

“It’s a disappointing ruling because it basically leaves targets of bad behavior by the IRS without a remedy,” Hans von Spakovsky, senior legal fellow at The Heritage Foundation, told The Daily Signal.

A federal judge sided with the IRS today and dismissed the case filed by conservative groups targeted by the tax agency.

>>> Commentary: The Wrongdoers at the IRS Get Away With It

Walton, who was appointed by President George W. Bush, decided that because the organizations eventually won tax-exempt status, they had remedied any wrongdoing. (His two rulings are below.)

“We are stunned by today’s judgment,” True the Vote founder Catherine Engelbrecht said. “The notion that the IRS can target Americans for years because of their political beliefs is reprehensible.”

“The notion that the IRS can target Americans for years because of their political beliefs is reprehensible.”–@TrueTheVote founder Catherine Engelbrecht

The court acknowledges in its opinion that the IRS did in fact target True the Vote for our perceived political beliefs, but then it holds that neither the agency nor the individual IRS agents or officers are responsible for this unconstitutional conduct. Right now, we are considering all legal options and will announce our next steps very soon.

>>> Commentary: Politico Found Lois Lerner. So Why Can’t the U.S. Attorney in Washington?

True the Vote and Linchpins of Liberty filed suit on the grounds that IRS officials improperly held up their tax-exempt status for several years.

Texas-based True the Vote, a 501(c)3 nonprofit organization that seeks to stop voter fraud, waited three years before the IRS awarded it tax-exempt status. It first applied in 2010 and received word in 2013.

Tennessee-based Linchpins of Liberty was created to mentor high school and college students in the continuing relevance of America’s founding principles. The IRS delayed the group’s application for 501(c)3 tax-exempt status for nearly three years, founder Kevin Kookogey recalled in an on-camera interview early this year.

“The court appears to believe that tossing a life-preserver to a swimmer who has already drowned can magically revive the dead.”–Linchpins of Liberty founder Kevin Kookogey

“Obviously, this ruling is stunning, and we intend to appeal,” Kookogey told The Daily Signal today, adding:

The court appears to believe that tossing a life-preserver to a swimmer who has already drowned can magically revive the dead, or that the government’s promise not to hurt anyone in the future releases it from liability for past harms.

Although True the Vote, Linchpins of Liberty and more than three dozen other groups argued there is no guarantee the IRS would not target conservative groups again, Walton ruled that the “prospect of future harm is speculative.”

“Given the unapologetic behavior of Lois Lerner and other IRS officials, and their total lack of remorse, I don’t think it’s ‘speculative’ that this could happen again in the future,” he said.

Kookogey said he was baffled by the judge’s logic.

“My constitutional rights were violated at the moment the IRS first began to unlawfully obstruct and delay my application for tax-exempt status back in 2011,” Kookogey said. “Granting my status three years later — after we filed the complaint and moments before the government was required to file an answer — does not undo that harm or render our claims moot.”

Walton also refused to grant a request from True the Vote to require Lerner and other IRS officials to pay a fine for delaying the group’s tax-exempt status and subjecting it to additional scrutiny.

Lerner was the head of the IRS division that oversaw tax-exempt organizations. She resigned last year and twice has refused to testify before Congress.

Although the groups filed suit before they were granted tax-exempt status, Walton cited a remedy in place from Congress that called for organizations seeking such status to go to court for it. That provision, he said, should have been used.

In addressing True the Vote’s request, Walton said because the IRS eventually granted it tax-exempt status, the group no longer had grounds for the case.

Kookogey, a Nashville lawyer, told The Daily Signal that Linchpins of Liberty  lost a $30,000 grant, a significant part of his own business and opportunities to mentor students because of the IRS’ actions. The agency’s delay in granting tax-exempt status also prevented Kookogey from fundraising and building the organization, he said:

If this ruling is permitted to stand, it will embolden a government which has already exceeded its limits to believe that it can violate the natural rights of its citizens until caught, at which point it must only apologize, ‘fix’ the problem, and move on to the next victim.

During Lerner’s  tenure, conservative and tea party groups such as True the Vote waited years for the IRS to rule on their applications. The IRS targeting scandal prompted more than a dozen hearings by congressional investigators.

Congress learned this summer that emails Lerner sent during the time of the targeting had vanished because a computer drive crashed.

True the Vote v. IRS Ruling by The Heritage Foundation

Linchpins of Liberty v. IRS by The Heritage Foundation