A Doctor’s Take: How Medical Professionals Can Take the Lead on Ebola 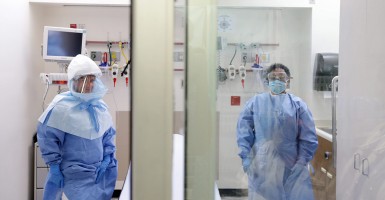 The situation surrounding the recent Ebola outbreak is changing rapidly. Since the spread of the deadly virus in West Africa and emergence of cases in the United States, the public has been on the receiving end of disparate accounts and misinformation, raising public anxiety and fostering insecurity.

The Obama administration’s apparent lack of a coherent plan has been compounded by the recent appointment of Ron Klain, an attorney without any medical or public health background. The national response by the Centers for Disease Control and Prevention ,while improving, has still not engendered confidence. In fact, CDC’s performance has even been, at times, counterproductive.

The U.S. response should be based on clear and accurate information about the disease, combined with the implementation of efficient and effective protocols to detect affected patients and to prevent contagion once the disease is detected.

Combating Ebola in this way ultimately depends on those at the local level, where individual health care personnel interact with individual patients. In the absence of strong leadership from the administration, it is incumbent upon the medical profession to take the lead in developing a measured response to prevent an outbreak at home and help to support international efforts to combat the disease abroad.

First and foremost, medical professionals in all specialties need to be up to date on accurate information about the disease. This is essential to dispel fear and to promote prevention, detection and timely and appropriate treatment. Since symptoms of the disease can be non-specific and include fever, headache, muscle aches, vomiting, diarrhea, stomach pain or unexplained bleeding or bruising, physicians should maintain a high index of suspicion. But they should also be able to assure their patients that without the associated travel or history of exposure, these symptoms are not indicative of Ebola infection.

Doctors in all specialties should be armed with accurate information about how the disease is contracted and spread to better assist in providing frontline defense.Ebola is spread through direct contact (through broken skin or through the eyes, nose or mouth) with blood and body fluids (like urine, feces, saliva, vomit, sweat and semen) or contact with objects (like needles) that have been contaminated with the blood or body fluids of a person sick with Ebola. Importantly, there is no evidence that the current strain of the Ebola virus is spread through the air, water or food.

Second, physicians should also ensure that proper protocols exist and are followed in their offices and in the hospitals where they work. Medical professional organizations like the American Medical Association, the American Association of Family Practitioners, the American College of Emergency Physicians and others have developed resources to assist in preparing and implementing these protocols. The American College of Surgeons has even developed guidelines for the unlikely event that an Ebola patient will need an operation. Although the concepts behind these protocols are standard and have been applied when dealing with other highly infectious diseases, they will likely need to be further clarified when implemented on the local level. The medical profession can play a critical role in ensuring that the protocols are followed and that they are appropriate for the local institution.

Although at this time it appears extremely unlikely that an Ebola outbreak in the U.S. will go beyond a few isolated cases, the current situation should be an opportunity to assess the preparedness of the emergency medical system to respond to the threat posed by natural disasters, bio-terrorism or any other mass casualty situation.

A local emergency medical system that has difficulty dealing with day-to-day capacity, is overcrowded and has to board sick patients in the emergency department is more likely to suffer a breach in what can be labor-intensive and time-consuming prevention protocols or miss the rare case of Ebola if and when it presents.

Finally, the U.S. medical profession should also take a leading role in international efforts to fight the disease at its source. While the U.S. should be as prepared as possible, the disease will only be overcome by stopping the spread in affected countries. Many of the reports from West Africa have been alarming. On October 14, during a news conference in Geneva, the assistant director-general of the World Health Organization stated that there could be as many as 10,000 new Ebola cases per week by December 2014. Biomedical research efforts are already underway in the US and elsewhere to develop new treatments and vaccines against the virus. In addition, while most American doctors cannot reasonably be expected to volunteer for service overseas, a number of physicians can travel to affected countries to volunteer their time and expertise.

The current Ebola outbreak in Western Africa and the appearance of isolated cases in the U.S. are alarming. This offers an important opportunity to assess the capacity of American health care and medical preparedness systems to respond to any medical crisis, natural or man-made.

Although national standards and protocols and international systems are needed, this is not enough. The primary unit in the fight against any disease is the interaction between a patient and a physician or other medical professional. The American medical profession cannot wait for direction from the Obama administration. Medical professionals should take a leadership role in providing accurate information, dispelling fears and being prepared to prevent, detect, treat and conquer the disease.