Why Did CNN Think Bristol Palin Recounting Being Called a ‘F***ing C***’ Was Funny? 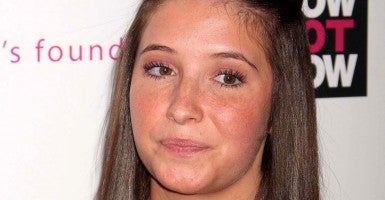 About three hours after this story was published, an apology statement from Costello was published in Politico. “Over the past few days I have been roundly criticized for joking about a brawl involving the Palin family. In retrospect, I deserve such criticism and would like to apologize,” Costello said.

If Bristol Palin were Chelsea Clinton or Malia Obama, we’d be having a different national conversation right now.

Last month, news broke about a brawl involving the Palin family in Alaska. Several of the Palins were involved in a drunken fight that erupted at a house they stopped at after after Todd Palin’s birthday party.

This week, TMZ obtained and released audio from police of a distraught and upset Bristol Palin, talking about the incidents that preceded the brawl. She says, “Some guy gets up, pushes me down on the grass, drags me across the grass, [and says] ‘You slut, you f—ing c—, you f—ing this.”

On CNN, female anchor Carol Costello breezily introduced the segment this way: “Okay. I’m just going to come right out and say it. This is quite possibly the best minute and a half of audio we’ve ever come across – well, come across in a long time anyway.” Then, Costello advised the audience before playing the audio of Bristol, “Sit back and enjoy.”

Because it’s so funny when a young woman is pushed down and dragged and called sexually derogatory terms to boot.

It doesn’t matter whether Bristol’s—or any of the Palin family members’—actions in the brawl were defensible. She doesn’t deserve, because no woman ever deserves, to be treated how she was.

If a recording of an emotional Clinton or Obama talking about being attacked and cussed out surfaced, the airwaves and the Internet would be full of discussions about how women still don’t get the respect they deserve, even in 2014.

But apparently feminists and the media—the same people who trumpeted the “war on women”— don’t care when men act this way to a conservative woman.

On feminist site Jezebel, there was zero outrage about the incident—just plenty of jeering at the Palins.

“Remember that time that the Palins all got together to look at Russia from their house (and just wave to it a little),” wrote Mark Shrayber, “and instead of a nice gathering where everyone talked about what a hero Bristol was for abstaining from sex, it turned into a fight with some old man calling her a ‘c***’ and a ‘slut’?” (Language not censored in original.)

Yes, Bristol, who became pregnant as an unmarried woman at age 18, has advocated abstinence, and worked as the Candie’s Foundation’s teen pregnancy prevention ambassador. She has done numerous public appearances and media interviews on the subject. In 2009, she told “Good Morning America”: “Regardless of what I did personally, abstinence is the only … 100 percent foolproof way you can prevent pregnancy.”

So because Bristol advocates abstinence before marriage, despite her own personal history, it’s fine for—or at least not worth being upset about—her being attacked and cursed at? That seems to be Jezebel’s attitude.

Bristol Palin, like every woman, deserves to be treated with respect. And it says something very grim about our culture that it’s not just a random person who treats her like dirt, but also our larger culture.