71% of Obamacare Signups Traced to Government’s Expansion of Medicaid 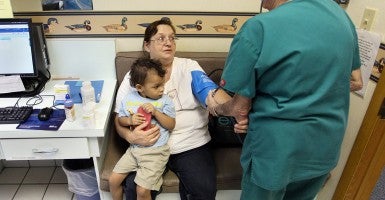 The vast majority of Americans  gaining health coverage under Obamacare actually qualified for Medicaid because of loosened eligibility —and that’s what boosted enrollment among those previously uninsured, according to a new report from The Heritage Foundation.

The Obama administration has boasted that the Affordable Care Act, popularly known as Obamacare, would allow those previously uninsured to purchase quality, affordable health care.

“The inescapable conclusion is that, when it comes to covering the uninsured, Obamacare so far is an expansion of Medicaid,” Heritage Foundation health policy experts Edmund F. Haislmaier and Drew Gonshorowski write in a research paper scheduled for release today.

Officials announced in May that more than 8 million Americans had picked a health plan on the Obamacare website, HealthCare.gov.

Haislmaier and Gonshorowski conclude that 8.5 million Americans gained coverage through Obamacare from January to July.

Commentary: The Real Story on How Much Obamacare Increased Coverage

However, their paper says, more than 70 percent of those signups can be traced to the expansion of Medicaid eligibility in 24 states:

Of the 8.5 million total individuals who gained health insurance coverage, 71 percent of that net coverage gain was attributable to Obamacare’s expansion of Medicaid to able-bodied, working-age adults.

In the states that adopted and implemented Medicaid expansion under Obamacare, enrollment skyrocketed as an additional 5.7 million Americans signed up for coverage.

In 21 states opting out of Medicaid expansion, however, enrollment was strikingly lower. The Heritage report finds that 355,674 Americans signed up for  Medicaid in those states.

In all, Medicaid enrollment increased by 6 million individuals for the first half of 2014.

The Affordable Care Act, popularly known as Obamacare, loosened eligibility requirements for Medicaid, traditionally the government’s health program for the poor. The changes made it easier for individuals with an income of up to 138 percent of the federal poverty line (roughly $16,000) to qualify for the taxpayer-funded health coverage.

>>> Report: Obamacare Will Add $131 Billion to Federal Deficits in Next Decade

As the Heritage experts note, many Medicaid-eligible Americans under the new requirements also don’t have dependent children.

Twenty-seven states and the District of Columbia opted to expand Medicaid. By July,  however, 24 states had implemented the program.

The Affordable Care Act went into effect in October. Its implementation included the rollout of HealthCare.gov, the online marketplace where consumers can peruse and purchase insurance plans.

HealthCare.gov’s advent was accompanied by well-publicized malfunctions, glitches and failures. White House officials scrambled to fix the website as consumers experienced long delays. As a result, the Obama administration extended the close of open enrollment from March 30 until April 15.

Despite the rocky rollout of HealthCare.gov, President Obama and then-Health and Human Services Secretary Kathleen Sebelius touted that enrollment in Obamacare insurance plans topped the original goal of 7 million.

According to reports from the Department of Health and Human Services, enrollment likely hovered around 7.3 million, as original estimates took into account those who selected a plan, but did not pay their first month’s premiums.

Sylvia Mathews Burwell, who in June replaced Sebelius as HHS secretary, said in a speech last month at the Brookings Institute:

Four years after President Obama signed the law, middle class families have more security, and many who already had insurance have better coverage. Fewer Americans are uninsured, and at the same time, we’re spending our health care dollars more wisely, and we’re starting to receive higher quality care.