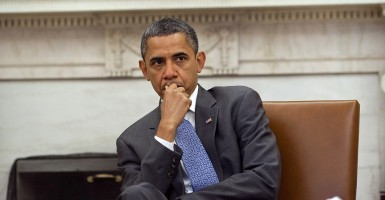 Yet the deficit was still almost $500 billion.

Clearly, the government continues to spend too much. We should tax enough to fund the legitimate functions of government, like national defense, homeland security, public health and others, but no more.

The new record also shows us that, absent policy changes, the amount of revenue the government takes out of the private sector keeps getting bigger. Tax revenue grows as income grows, no matter what kind of tax system is in place. A progressive system like ours, with higher rates on higher levels of income, results in a bigger increase in revenue during economic expansions than a flat rate system would. Alternatively, when the economy enters a recession, a progressive system reduces revenue intake at a faster clip.

Tax revenues are rising even faster than the sluggish economic should yield. Tax revenue increase nearly $247 billion in fiscal year 2014 from fiscal year 2013. Contributing to that growth were two large tax increases passed during President Obama’s tenure, namely the tax hikes in Obamacare and the fiscal cliff tax increases in 2013 which allowed the expiration of certain Bush-era tax cuts.

Together, those tax increases raised revenue by approximately $74 billion last year (see here and here). Without those hikes, receipts would likely not have topped $3 trillion. (From 2014 Federal Budget in Pictures)

A new record for tax revenue in nominal dollar terms is to be expected each year when the economy is growing, as ours is, albeit at a too slow pace. As long as the economy keeps plodding along, revenue will increase. Given that, and that the economy will likely continue its tepid growth this year, receipts in fiscal year 2015 should break last year’s record.

Tax receipts measured in nominal dollar amounts are important, but they don’t tell us everything we need to know, such as whether taxes are too high. To know that, because a growing economy raises tax revenue automatically, it is necessary to compare that revenue to the size of the economy, in order to contrast it to previous years. According to the Treasury Department, tax revenue was 17.5 percent of the economy last year.

That is in line with the historical average as a share of gross domestic product, but below the average during periods of economic growth. On our current course, revenue will likely surpass both averages next year and grow higher each successive year.

Nevertheless, going forward we are likely to hear calls from Obama and some in Congress to raise taxes yet again. But the recent data shows there is plenty of revenue coming in to Washington.

In fact, unless there is another recession, the president and Congress should instead be planning to reduce taxes so they do not rise permanently above their historical amount.