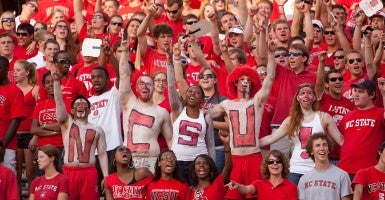 RALEIGH, N.C.—Consider a few truths about the politics of students at North Carolina State University, a school known for its engineering and agriculture programs and said to be more conservative than the higher-profile University of North Carolina at Chapel Hill.

Political ads turn the students off. They don’t pay attention to the ads, and are unlikely to be swayed by their impersonal nature.

The students want to be both targeted and engaged. They want to feel wanted.

Republicans won’t earn the affection of young people unless they adopt a modern message while staying true to conservative values, particularly on economic issues, according to interviews with politically engaged students here.

This past weekend, the Republican National Committee sent its chairman, Reince Priebus, to North Carolina to rally college voters, a demographic historically elusive to the GOP. The hope is the effort could make a difference in the state’s competitive U.S. Senate race.

Some 30 or so college students, most representing NC State, walked across the street to attend a Saturday rally at state party headquarters in Raleigh. In the interest of getting less-biased data, The Daily Signal spoke later that night to young adults who didn’t attend the rally. The goal: Gauge their interest in the midterm race, which pits State House Speaker Thom Tillis, the Republican challenger, against Sen. Kay Hagan, the incumbent Democrat.

Five of the eight interviewed—two of them recent graduates—say they identify as Republican.

Although all of them say they are paying attention to the Hagan-Tillis race and plan to vote, the majority of those interviewed reveal deeper concerns about the future of the Republican Party.

‘How You Frame the Message’

Yet Cobb has a problem with the Republican Party.

Cobb, eating with his hometown friends at the Chipotle on Hillsborough Street—the main artery running through the NC State campus—says Republicans have let Democrats position the GOP as out of touch and uncool to millennial voters.

“It’s a matter of how you frame the message,” Sampson says. “Republicans don’t do enough to combat the negative image. There’s a perception that Republicans are racist, and they just take it. They need to be on the attack more.”

‘Need to Go Out and Argue’

Sampson, who is black, says that for Republicans to control their message, they must be visible on issues and with communities that they normally wouldn’t confront.

He admires the work of Sen. Rand Paul, the Kentucky Republican, who has courted black Americans.

Paul recently met with black leaders in Ferguson, Mo., which dominated headlines over the summer after a white police officer shot and killed 18-year-old Michael Brown, who was black.

Paul has endorsed an overhaul of the nation’s criminal justice system that he hopes would make it easier for nonviolent criminals to reintegrate into society. “Republicans are scared of confrontation,” Sampson says. “The only way to change someone’s mind is to say, ‘Look, here is what I am offering.’ Sometimes you just need to go out and argue with people.”

Sampson and his friends say the easiest perception Republicans can control is how “cool” they are.

Justin Walker, a recent college graduate, works as a mechanic. He says being cool has become the biggest selling point for Democrats to young voters.

“A lot of their information is not true, but they are cool,” explains Walker, who identifies as an independent libertarian.

“They need to hire a style guru,” he says. “You see conservatives show up to public events in tri-cornered hats. We get it, we’re conservative. But we need to be the most stylish people at the table.”

‘A Way to Be Pragmatic’

Many of those interviewed come from conservative families that instilled traditional values. But some say Republicans must be flexible on certain issues, to match changes in society.

Same-sex marriage and abortion are the two touchiest subjects for these conservative students.

Court rulings overturning current state laws have made same-sex marriage, at least for now, legal in the majority of states.

>>> Take 5: Debate Attacks Scored by the Numbers in This Senate Race

“The government should get out of the marriage business,” Sampson says. “If a church lets you get married, that’s the church’s business. With social issues, there’s a way to be pragmatic about it–to make sure everyone is respected.”

Justin Baird, an NC State freshman from Garner, volunteers at GOP events. He comes from a conservative background and says he plans to vote for Tillis “because he matches my views.” But those views are related to the economy, not social issues.

“I am more concerned with economic issues,” Baird says. “A candidate’s views on social issues wouldn’t impact my vote as much.”

David and Jennifer Curley, siblings from Charlotte, say they vote based on the completeness of a candidate’s conservatism.

“I support conservatives on economic and social issues,” says David Curley, a junior who voted for Mitt Romney for president in 2012 and will support Tillis on Nov. 4.

Just like most Americans, students worry most about what’s closest to home: the economy.

Jerry Jones, a recent college graduate, is the most reserved in the group of friends eating at Chipotle.

He has a degree, but he frets about his job prospects.

“I’m concerned about the economy,” says Jones, who votes independently and is undecided about the Tillis-Hagan race. “There’s too much government regulations and not enough job creation.”

The economy matters most to Jerry Jones, who says “there’s not enough job creation.”

Walker, the independent libertarian and Jones’s friend, says he thinks Republicans fall on the correct side of the economic debate.

Republicans just don’t do a good enough job of communicating their message, Walker says, because they’re too busy playing defense on other issues.

“Republicans need to do a better job of selling the economic aspect to young people,” Walker says. “Because most people in general believe spending less money is good.”