On the Campaign Trail: ‘Ground Zero’ in North Carolina and the GOP Chase for College Kids 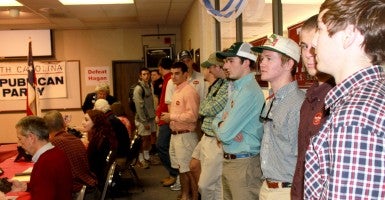 RALEIGH, N.C.–For Republicans, “ground zero” is the state where the party’s fortunes in the Senate could be won or lost.

And for a Republican Party that has traditionally struggled to match the Democrats’ ground game, “ground zero” is also the volunteer-driven campaign offices dotted throughout that same state.

“This is ground zero in America,” said Reince Priebus, chairman of the Republican National Committee, who campaigned Saturday in North Carolina for Thom Tillis, the GOP Senate candidate.

Priebus, speaking with Tillis back-to-back at two campaign offices–known by the North Carolina GOP as “victory centers”–left his Washington, D.C., headquarters to try to be a difference in a race that could come down to the wire on Election Day.

“[North Carolina] was ground zero in 2012 and I presume it will be two years from now,” Priebus said. “We’ve got to win here. We know this will be won right here at the victory center. We can take Thom over the finish line.” 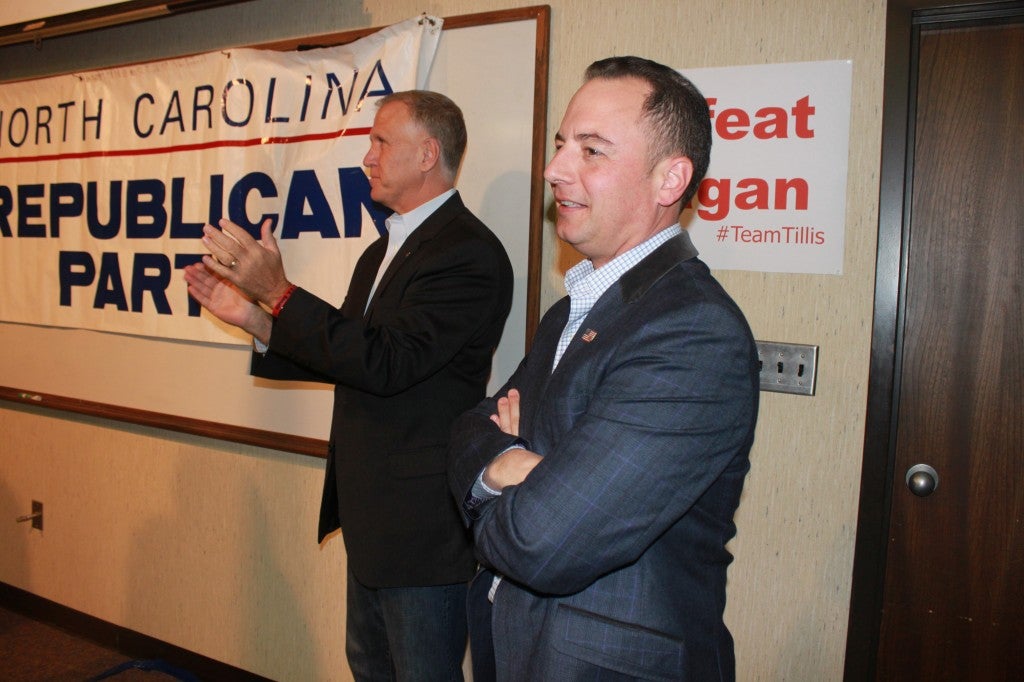 In the state capital of Raleigh, “ground zero” looks like a nondescript state party headquarters, where volunteer get-out-the-vote callers stay near their telephones while the man they’re calling for delivers a campaign speech.

Rhett Johnson is a fluffy-haired, high-socked student intern from the college across the street. His neon orange running shoes dominate attention.

Those shoes have traveled–usually, by means of jogging, considering Johnson’s youth–to more than 10,000 homes of potential voters this summer.

Priebus calls out Johnson in his speech, before mostly college students who have made the short walk from North Carolina State University. 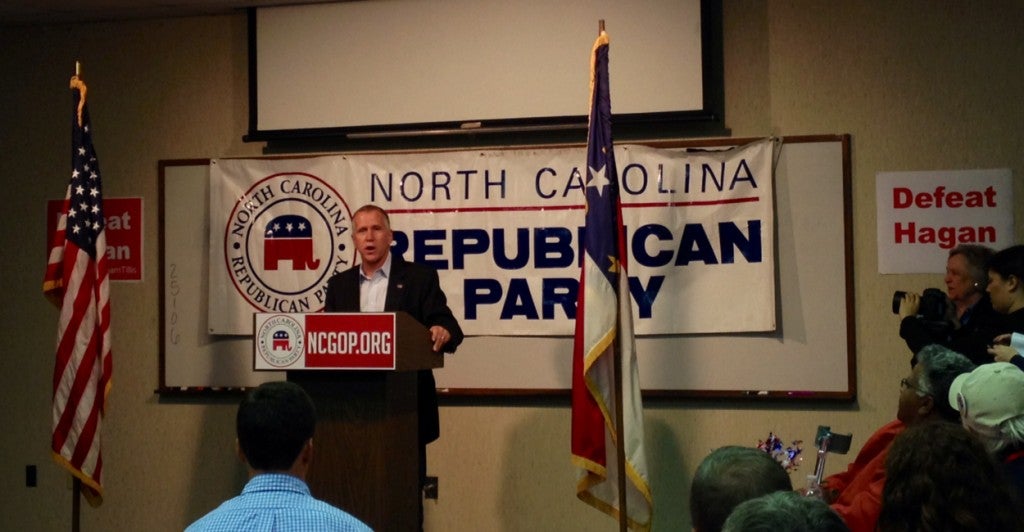 The work Johnson does is more important to the Republican establishment than it had been in the past.

“This is a total revamp of our national party,” Priebus said. “It can’t be where we are a U-Haul trailer of cash for the presidential nominee. We know this will be won right here at the victory center.”

Throughout his campaigning and during debates, Tillis has focused mostly on national issues, and tried to distance himself from Hagan’s positions.

Hagan, meanwhile, has framed her campaign as a referendum on the conservative shift taken by the state legislature under Tillis’ leadership. The Hagan campaign did not respond to The Daily Signal’s request to interview the candidate or campaign workers.

Tillis continued with his own strategy Saturday.

On the Islamic State, the terrorist group also known as ISIS: “Bombing targets isn’t a strategy,” Tillis said. “It’s a tactic. ISIS is the greatest threat we’ve ever seen.” 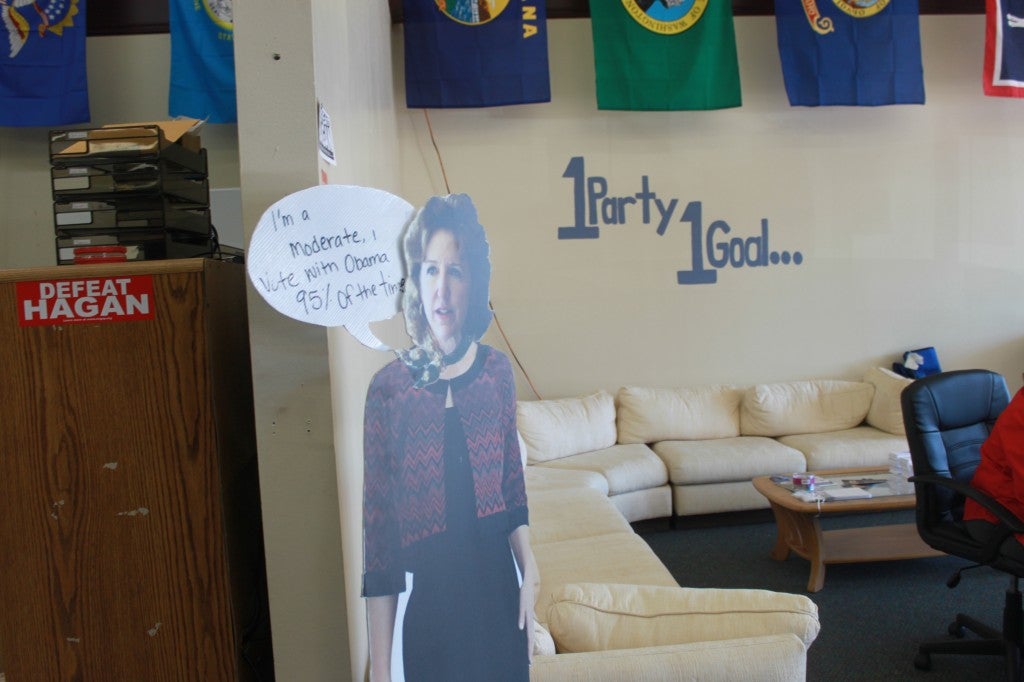 Tillis contrasted himself as someone who would vote with and against the president–and his own party–depending on the issue.

“This message is about electing a senator from North Carolina who is independent, who will stand up to the president when he’s wrong and stand up to our leadership,” Tillis said. “It’s not difficult and complicated. It just takes courage and commitment.”

But for the college students watching, many wearing red “Thom Tillis” stickers, voting records matter less than a candidate relating to their values.

It’s been a tough demographic for Republicans to reach.

“Our generation is socially changing,” said one rally attendee, J. Charges, a North Carolina State sophomore. “Liberals appeal more to the younger generation. But conservatives want to change that.”

In a direct appeal to them, Tillis told his backstory, how he left his parents’ house at 17 to work in a warehouse, putting off college to do so, and how he eventually rose to become a Senate candidate. 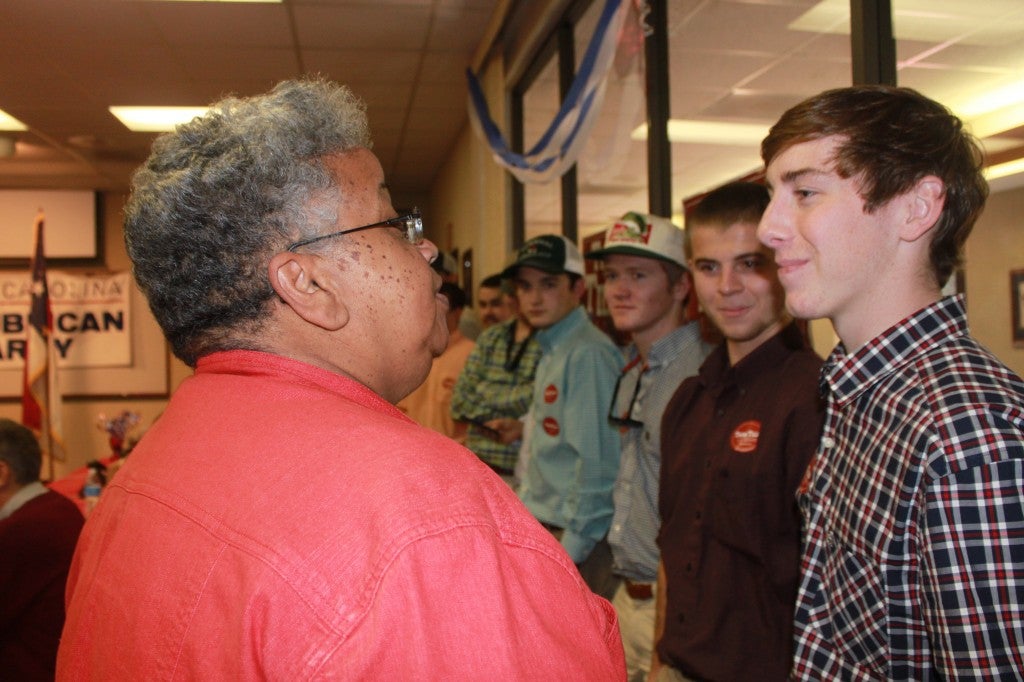 North Carolina is expected to be the most expensive Senate race in history.

Nearly $80 million in political ads have already flooded the state, a figure that could rise as high as $100 million by Election Day.

The latest polls show Sen. Kay Hagan, the Democrat incumbent, with a slight edge over Tillis.

North Carolina has one Republican senator already, a Republican governor and a Republican-controlled state legislature. But Democrats are making inroads in North Carolina, as President Obama won the state in 2008 and Hagan defeated former Sen. Elizabeth Dole.

Though Obama’s approval rating is abysmal here, Tillis, the state House speaker, has struggled to energize the Republican base.

The North Carolina GOP is hoping to match the energy of the Democrats’ ground game. Photo: Josh Siegel/The Daily Signal

He ties Hagan to the president at every chance, but Tillis can’t separate from her in the polls.

Tillis, who on Saturday dressed relaxed in blue jeans and without a tie, thinks he finally is gaining some ground. Priebus’ presence in North Carolina revealed the GOP’s nervousness in hoping that’s true.

“We’ve caught them,” Tillis said Saturday. “We’ve got the momentum that tells us we’re going to win.”

“Ground zero” is also the Guilford County Republican Party headquarters, situated in a rundown commercial center by a Cajun restaurant, in the heart of Hagan’s hometown.

This, unofficially, is the largest Republican party headquarters on the East Coast of this state, and, with 25 volunteers out knocking on doors this Saturday, the place’s emptiness makes it feel big. 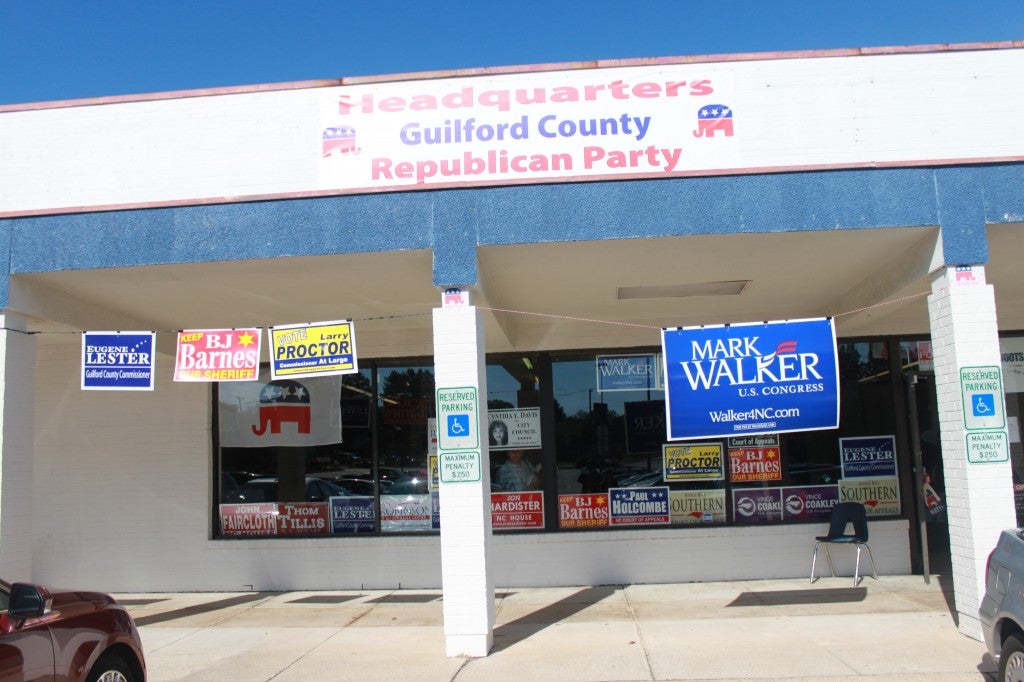 Tillis and Priebus, riding together in a black SUV, travelled one hour and 15 minutes south on Interstate 85 to get here, and they were a few minutes late.

Tillis works to make up for it by hugging and kissing supporters–faces more familiar to him than the college students in Raleigh.

Here, there were only a handful of students, so Tillis spoke to his base, preaching on the economy and faith.

He continued: “Pray for the president. Pray for Kay Hagan. Pray that God leads America to begin to realize that America is a great nation.” 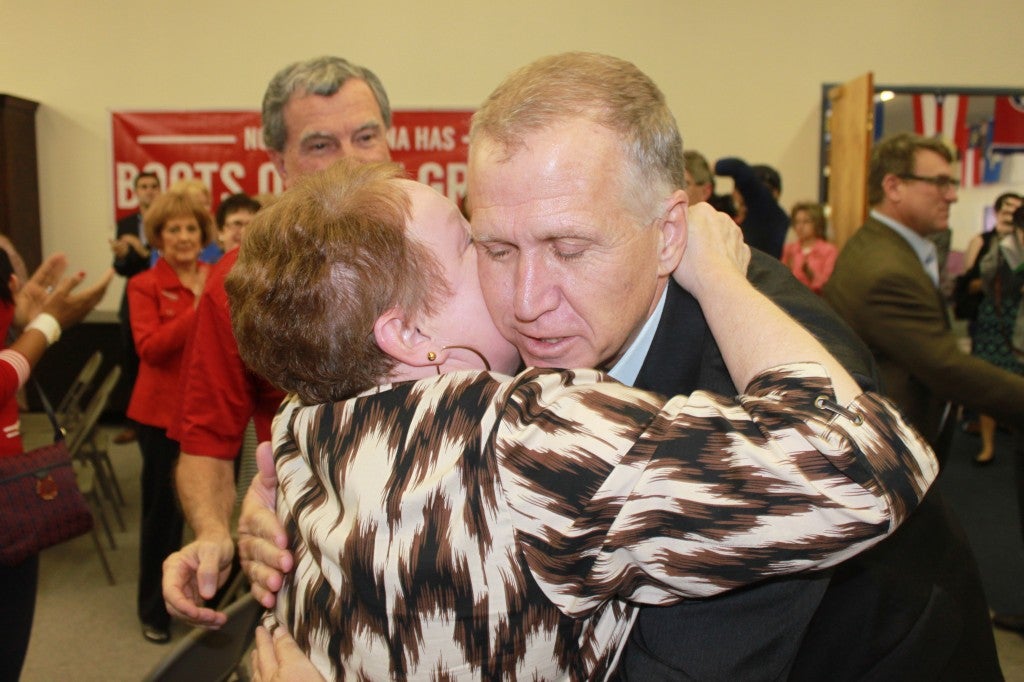 For the few young people in the crowd, it was unclear if Tillis’ message resonated.

This generation is open-minded, and they were not about to pledge allegiance to a specific party–or candidate.

“I would rather choose a candidate over a party,” said Steven Carbone, a student at nearby Ragsdale High school, who came to the rally on assignment for his political science class.

“I want to get informed about the race,” he added. “Ninety percent of our students don’t care about politics. I want to know more than the average student.”

With his mind far from made up–and still a few years from voting age–Carbone walked off with two of his friends and asked to take a photo with Tillis.