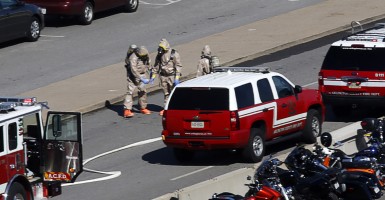 Emergency workers in hazmat suits work in a Pentagon parking lot after a woman who recently traveled to Africa vomited there, in Washington October 17, 2014. (Photo: Reuters/Kevin Lamarque)

What is the Pentagon trying to do with this new Ebola domestic response team?

When called upon by other parts of the federal government (or state governors) for help in domestic emergencies (hurricanes, floods, etc.), the Defense Department provides support. It can be logistical, medical or related tosecurity and transportation. This mission, which is part of a program called Defense Support to Civil Authorities, falls into the medical category.

Does the Defense Department have the sort of expertise that would be needed to assist medically in a domestic outbreak?

Yes. The military has some of the most talented and knowledgeable medical personnel that specialize in infectious diseases. They are also very good at short notice “on call/fly away” missions. By organizing the team now, gathering the correct personnel and updating their training on the latest knowledge we have on Ebola containment, the military is ensuring this team can be a huge help in the event of an outbreak in a facility that does not have the training or expertise. They can provide a strong adjunct to the Centers for Disease Control fly-away teams that already exist.

Isn’t using the federal military domestically against the law?

Will this mean that the military support already planned for Africa will be cancelled?

No. Even with the constraints put on the military by the Budget Control Act, continued operations in Afghanistan and operations against ISIS, the military can do both these Ebola related missions without significant difficulty.

Is this new team really necessary?

That remains to be seen. If no new cases arise, it may not be needed, but should there be an additional outbreak, this is a prudent step.