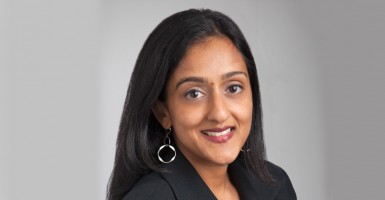 So who supports decriminalizing cocaine, heroin, LSD, methamphetamine, ecstasy and all dangerous drugs, including marijuana?

No, it’s not your teenage nephew. It’s President Obama’s new acting head of the Justice Department’s Civil Rights Division, Vanita Gupta. In 2012, Gupta wrote that “states should decriminalize simple possession of all drugs, particularly marijuana, and for small amounts of other drugs.” (Emphasis mine).

Last week, President Obama appointed Vanita Gupta to the position of acting head. According to the Washington Post, the administration plans to nominate her in the next few months to become the permanent assistant attorney general for the Civil Rights Division. Her views on sentencing reform–a bi-partisan effort in recent years–have earned her qualified kudos from some conservatives.

But her radical views on drug policy–including her opinion that states should decriminalize possession of alldrugs (cocaine, heroin, LSD, ecstasy, marijuana etc.) should damper that support of those conservatives, and raise serious concerns on Capitol Hill.

As the deputy legal director of the American Civil Liberties Union and the director of its Center for Justice, Gupta’s legal and policy positions are well documented in her long paper trail, which, no doubt, will be closely scrutinized if and when she is nominated and gets a hearing before the Senate Judiciary Committee.

To begin, she believes that the misnamed war on drugs “is an atrocity and that it must be stopped.” She has written that the war on drugs has been a “war on communities of color” and that the “racial disparities are staggering.” As the reliably-liberal Huffington Post proclaimed, she would be one of the most liberal nominees in the Obama administration.

Throughout her career, 39-year old Gupta has focused mainly on two things related to the criminal justice system: first, what she terms draconian “mass incarceration,” which has resulted in a “bloated prison population, and second, the war on drugs and what she believes are its perceived failures.

She is particularly open about her support for marijuana legalization, arguing in a recent CNN.com op-ed that the “solution is clear: …states could follow Colorado and Washington by taxing and regulating marijuana and investing saved enforcement dollars in education, substance abuse treatment, and prevention and other health care.”

Yet just last week the current Democratic Governor of Colorado, John Hickenlooper, said that legalizing recreational use of marijuana was a “reckless.” And there is a growing body of evidence to prove his point: (1) pot-positive auto fatalities have gone up 100 percent in 2012, the year the state legalized pot; (2) the majority of DUI drug arrests involve marijuana and 25 to 40 percent were pot alone; (3) from 2011 through 2013 there was a 57 percent increase in marijuana-related emergency room visits–and there are many other indications of failure. New research, from a 20-year study, proves the dangers of marijuana.

But Gupta does not stop with marijuana. In calling for all drugs to be decriminalized–essentially legalizing all dangerous drugs–Gupta displays a gross lack of understanding of the intrinsic dangers of these drugs when consumed in any quantity.

Heroin, LSD, ecstasy, and methanqualone are Schedule I drugs, which are defined as “the most dangerous drugs of all the drug schedules with potentially severe psychological or physical dependence.” Cocaine, methamphetamine, Demerol and other drugs are Schedule II drugs, defined as “drugs with a high potential for abuse…with use potentially leading to severe psychological or physical dependence.”

Sound public policy must be based on facts, not radical unsafe, and dangerous theories.