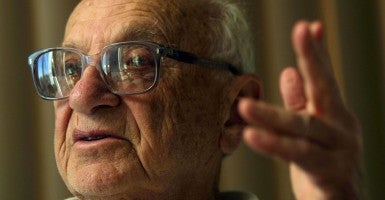 Renowned author George Gilder recently told an audience at The Heritage Foundation that conservatives have a fundamental problem in their economic ideology when it comes to money. They’re all for free markets in other areas of the economy, but when it comes to this one topic, they want not just rules but rules that don’t make sense.

Gilder said too many conservatives seem to have accepted that “centralized control of money is crucial to economic growth and expansion.” And who does he blame for this? In part, Gilder said, it was Milton Friedman, the iconic free-market economist, who set us on this course.

It is largely because of Friedman, said Gilder, that other conservatives accept centralized control of money and “join in believing that the money supply has to expand regularly to accommodate economic growth.”

Gilder is probably right in that Friedman’s “constant money growth rule” has helped keep conservatives focused on constraining the Fed with “rules-based” monetary policies. But Friedman’s original idea took off in the 1960s, and even though many conservative economists seem to have missed it, Friedman suggested a very different approach to monetary reform in the 1980s.

The fall issue of the Cato Journal includes an excellent reminder of the elder Friedman’s ideas. This article, Monetary Policy Structures, originally appeared in a 1984 book titled Candid Conversations on Monetary Policy.

It’s well worth reading the entire article, but here are a few Friedman quotes from Monetary Policy Structures that may surprise some people.

Page 632: I now realize in my later years that our approach has been misconceived. It was our view that the way to improve monetary policy was (a) to learn more about how money operated, (b) to construct appropriate rules for the conduct of monetary policy, and (c) to persuade the people who run monetary policy that they were the right rules.

Page 634: My ultimate ideal at the moment…is to eliminate every element of discretion. At the moment, my ultimate proposal is that we freeze what is called high-powered money—that is to say, current Federal Reserve notes and deposits at the Federal Reserve. To put it more simply… never print another one except to replace those that wear out. Just freeze it, and you don’t need a Federal Reserve System.

Page 634: Under those circumstances, what would happen would be that the markets would determine and would adjust the total quantity of money in the sense of the money we use including deposits plus currency.

Page 636: As you can see, I am not in favor of the independence of the Federal Reserve. This is a democracy. And I believe that money is too important to leave to [a] central bank, that it is intolerable that a group of non-elected people should have the power to create a major inflation or a major recession.

Page 636: The best change of all would be to abolish the Fed completely and simply have zero creation of high-powered money and no discretionary powers anywhere.

Page 636: My preference is to have a constitutional amendment to enforce a zero growth in high-powered money.

Page 645: As an economist and student of money, I would predict that none of those competitive monies will displace the official government money unless there is really extreme mismanagement by the government. That doesn’t mean I’m not in favor of it; I’m in favor of it. Maybe I’m wrong. And if I’m wrong, I’d like to see it operate. I’d like to see it have the opportunity.

Page 648: Now, I may be wrong. But you know the world would exist very well, it would be a very fine world, if prices were going down on the average of 1 percent a year or 2 percent a year.

Page 648: I believe that the Federal Reserve does a large part of its harm by its continuous fine-tuning in the market. It’s in and out, in and out. It’s introducing an additional uncertainty in the market that need not be there. The Federal Reserve itself can do a lot better than that and cut out this fine-tuning it’s engaged in. But if it did, it would lose its influence and importance, so it isn’t going to do it.

Page 651: I’ve always been in favor of immediate disclosure of Fed action. There is absolutely no justification whatsoever for the Fed waiting a month before they disclose what they said and what they have decided at these meetings.

Page 651: In fact, I would be in favor of publishing transcripts of the discussion at open market investment committee meetings. So I’m all in favor of immediate disclosure.

Friedman’s work on monetary policy rules has influenced generations of economists. It’s virtually impossible to get a Ph.D. in economics without studying his research, as well as the work of those who followed in his footsteps.

But this focus is almost always on rules-based monetary policies. Few graduate school seminars even mention that Friedman was in favor of competitive banking.

It’s all but certain this state of affairs has contributed to what Gilder calls the “division [that] has paralyzed conservatives in addressing the issue of money.” But Friedman clearly wanted to move past that point.