As His Wife Delivers Their Baby, LGBT Group Smears This Pro-Marriage Professor as International Criminal 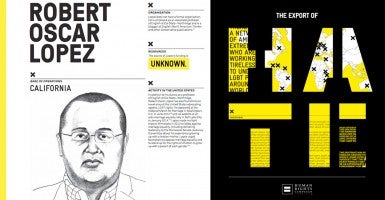 Robert Oscar Lopez is the target on page 15 of Human Rights Campaign's 'The Export of Hate.'

Having a baby is supposed to be one of the happiest moments of your life. But for Bobby Lopez, an unusual figure in the marriage debate, it was a day overshadowed by fear.

His wife was in labor with their second child when Lopez received hateful phone calls and emails from LGBT rights activists.

Because two days prior, the Human Rights Campaign—a political action group whose mission is to “achieve equality” for lesbian, gay, bisexual and transgender Americans—put out its latest blast email in a campaign called “The Export of Hate.” The cover of Human Rights Campaign’s ‘The Export of Hate.’

Lopez, openly bisexual but married, works as an English professor at California State University-Northridge. He incurred HRC’s wrath because of his outspoken view that children do better when raised by a mother and father than they do when raised by parents of the same sex.

Lopez, 43, was raised in a household by two mothers. He drew public attention in 2012 after penning an account of that experience in an article for Public Discourse titled “Growing Up With Two Moms: The Untold Children’s View.”

Overall, “children of same-sex couples have a tough road ahead of them,” Lopez argued, writing:

When your home life is so drastically different from everyone around you, in a fundamental way striking at basic physical relations, you grow up weird. I have no mental health disorders or biological conditions. I just grew up in a house so unusual that I was destined to exist as a social outcast.

Ever since Lopez went public with his story, left-leaning gay rights groups such as HRC and GLAAD, an organization that calls itself “the voice for LGBT equality,” have targeted Lopez as an “extremist.”

They have provoked those on their mailing lists to write and call his family and university, attempted to blacklist him with the media and academia, and put in public records requests to acquire his contact information.

“It was an onslaught from that point forward,” Lopez recalls in an interview with The Daily Signal.

Already effectively shunned by many student groups, other organizations and media outlets in the U.S., Lopez still speaks regularly wherever he can, including foreign venues, about three core beliefs:

Having grown up in a same-sex household, Lopez says he is particularly qualified to speak on these subjects.

“This debate is ultimately about me and people like me,” he says. “If anyone has a right to weigh in on this with full academic freedom and freedom of speech, it’s me.”

And being bisexual, Lopez considers himself a member of the LGBT community.

In explaining his sexuality, which he admits is unconventional, Lopez told The Daily Signal:

I am bisexual. I have never been ex-gay and have never tried to hide that I’m gay. I just happen to be in a relationship with a woman and I’m raising my child with her.

Lopez is fluent in seven languages, boosting his ability to promote his message internationally. He says he never intended to go international, but had no choice when HRC, GLAAD and other groups blacklisted him.

Now, HRC has responded by labeling him an “Exporter of Hate.” The attack began in September, when the organization published a hit list of “American extremists who are working tirelessly to undercut LGBT people around the world at every turn.”

Featuring FBI-style sketches of faces and videos of advocates of marriage as the union of a man and a woman—including Scott Lively, Sharon Slater and Peter LaBarbera—the campaign likens Lopez and others to international criminals. Bobby Lopez is caricatured as an international criminal in the LGBT rights group’s attack.

In the campaign, Lopez says, HRC falsely claims he spoke for the National Organization for Marriage and was part of the World Congress of Families, two groups that oppose the redefinition of marriage.

“These are blatant lies,” he says.

On Oct. 6, days before his wife went into labor, HRC blasted out an email specifically targeting the professor, calling him a “rising star on the international anti-LGBT scene.” Sent to the group’s 1.5 million claimed members and supporters, the email urged them to “expose” Lopez as an “exporter of hate.”

In some versions of the email, which recipients in turn forwarded to others, the subject line read: “‘Same-sex parenting flagrantly violates children’s rights…it is abuse. Face it.’- Robert Oscar Lopez, Associate Professor, Cal State-Northridge.”

>>> Ryan T. Anderson: 7 Reasons Why Today’s Marriage Debate Is Nothing Like the One on Interracial Marriage

HRC’s email blast happened to coincide with the birth of Lopez’s second child.

“I actually received the worst hate mail and voice messages just when the delivery was happening,” Lopez says in a phone interview.

Officials at California State University-Northridge received emails demanding that they take action against the professor. Some of his students told him the day of HRC’s blast email that they felt “tricked” because Lopez didn’t disclose he was “anti-gay.”

“I have people calling me s—bag at my job, on my work line,” Lopez says.

“It’s endangering me and my family,” Lopez says of the HRC campaign. “I don’t have a lot of money, I’m not rich, and I don’t have a big organization with tons of money that can help me and support me.” He adds:

Being completely isolated like this, and then having to worry every time I leave my home—and my wife is there with the newborn—and not knowing whether I’m going to get killed, it’s really hard.

HRC did not respond to The Daily Signal’s multiple requests for comment about the campaign, and to explain why—four weeks later—the organization has not removed Lopez’s contact information from the comment section accompanying its video.