What Really Ended the Great Depression 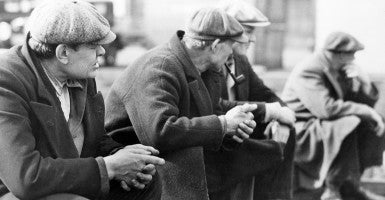 The Great Depression. A row of out of work men at the New York City docks in 1930s. (Photo: Newscom)

“What is history but a fable agreed upon?” as Napoleon once put it, and never has that been more true than the story of the Great Depression and its aftermath. With liberals again pitching more government spending “stimulus” in Washington, it’s critical we get this history right.

In a previous column I unmasked the historical lie that Franklin Roosevelt’s New Deal programs ended the Great Depression. After seven years of New Deal-era explosions in federal debt and spending, the U.S. economy was still flat on its back, and misery could be seen on the street corners. By 1940, unemployment still averaged a sky-high 14.6 percent. That’s some recovery.

However, I’ve been deluged with the same question from readers: Ok, what did end the Great Depression? Again, the history books get this chapter of history wrong. Most history books tell us that it was government spending on steroids to mobilize for World War II after the Japanese attacks on Pearl Harbor on Dec. 7, 1941.

Well, it is true that the economic output surged and unemployment fell, but periods of all-out war are very different than periods of peace. Is it any surprise that unemployment fell dramatically when nearly 12 million Americans joined the military?

My mother, a teenager in that period, used to tell me that during the war, when fuel was scarce and needed for the military, you wouldn’t be caught dead driving to the movie theater or a party. It was regarded as unpatriotic and selfish. People continued to produce even with high tax rates (94 percent during the war) when their tax dollars were financing the fight against the Nazis and the Japanese.

For nearly four years — from 1942 to 1945 — America was not a free-market economy. We were an all-out wartime economy — with the normal laws of economics suspended.

However, a war is no way to fix an economy — obviously. Countering terrorist acts of the Islamic State is not a jobs program. During World War II, when we built ships, tanks, fighter planes, dropped bombs and sent our troops into harm’s way, we weren’t creating wealth. A war is no more stimulating to the economy than a burglar stealing your money, the Japanese tsunami in 2011, Hurricane Katrina in 2005, or a tornado that levels an entire town. Without such calamity, the resources spent reconstructing (or destroying in the case of war) would be spent either purchasing useful, life-enhancing products for consumption or investing in technology and capital equipment requisite to increasing economic output.

In the 1940s, government spending did indeed surge. The federal share of gross domestic product (GDP) rose from less than 12 percent in 1941 to more than 40 percent in 1943-45. In other words, almost half of everything that was produced in the nation was to fight the war. Domestic spending on many FDR New Deal programs in education, training and social services dropped more than 90 percent.

The real issue is what caused the economy to surge after the war was over.

This story is also not covered in the history books. Shortly after his third re-election in 1944, and at a time when the outcome of the war was no longer in question, FDR and his domestic advisers plotted a “new” New Deal with such spending items as national health insurance. The Keynesians were sure that the massive reduction in government spending would catastrophically tank the economy.

Paul Samuelson, the dean of neo-Keynesians at that time, warned in 1943 that unless wartime spending and controls were extended, there would be “the greatest period of unemployment and industrial dislocation which any economy has ever faced.” Business Week predicted unemployment would hit 14 percent with the postwar cutbacks.

Here’s what happened. Government spending collapsed from 41 percent of GDP in 1945 to 24 percent in 1946 to less than 15 percent by 1947. And there was no “new” New Deal. This was by far the biggest cut in government spending in U.S. history. Tax rates were cut and wartime price controls were lifted. There was a very short, eight-month recession, but then the private economy surged.

The less the feds spent, the more people spent and invested. Keynesianism was turned on its head. Milton Friedman’s free markets were validated.

In 1946, the unemployment rate averaged below 4 percent, and it stayed that low for the better part of a decade. This all happened during the biggest reduction in government spending in American history under President Truman.

In sum, it wasn’t government spending, but the shrinkage of government that finally ended the Great Depression. That’s what should be in every history book — but isn’t.