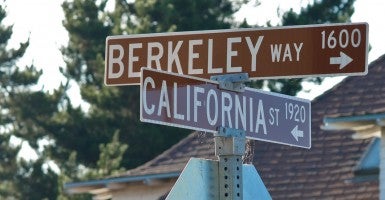 This month marks the 50th anniversary of the Free Speech Movement at the University of California, Berkeley. The student movement that sparked the rebellions of the 1960s is widely celebrated, particularly at Berkeley, which has hosted several dozen special classes, sing-ins and lots of “political” poetry over the past month.

Berkeley’s embrace of the FSM (as the movement is known to its admirers) is not subtle. The steps of Sproul Hall are named after Mario Savio, whose famous “bodies upon the gears” of the “machine” speech started it all. A campus dining hall is called the Free Speech Movement Cafe. Former FSM leader Sol Stern, who has since become disaffected with his old colleagues, calls it “FSM kitsch.”

UC Berkeley today is very much the FSM’s kind of school. And it is even fair to say that the school is still run by its heirs.

As Mr. Stern describes it in the City Journal, the cultural ethos of New Left — the driving force behind the FSM — is Berkeley’s reigning orthodoxy. A fawning biography of Savio, who died in 1996, is required reading for freshmen. The administration’s “Division of Equity and Inclusion” requires all undergraduates to take a course on “theoretical or analytical issues relevant to understanding race, culture, and ethnicity in America.” Rest assured the course does not serve to encourage free and open inquiry.

But what of free speech? How is it faring 50 years after Savio first jumped on the roof of a police car to rally students to the cause?

Not very well. As Mr. Stern laments, “The great irony is that just as Berkeley now officially honors the memory of FSM, it exercises more thought control over students than the hated ‘multiversity’ that we rose up against a half-century ago.”

At today’s Berkeley, political protests are allowed, but only in two designated places. Certain causes — such as defending Israel — are frowned upon and often openly rebuked. A speech code in the student housing guide broadly warns against “verbal abuse” and “hate speech.” Students are urged to report what they think may be “hate crimes.” Posters for events must be submitted five days in advance to a housing review board before they can be posted. Even the Board of Regents of the entire UC system shares some of the blame, disinviting former Harvard President Larry Summers to speak to them because of a controversial statement he once made.

What’s gone wrong? How did a movement ostensibly dedicated to freedom of speech and expression become its opposite?

Because the FSM wasn’t really about free speech. It was about the New Left’s campaign to overturn the old system. By portraying the liberal (for those times) administration of Berkeley as the moral equivalent of the Jim Crow South, the FSM showed its hand — it wasn’t standing up for the First Amendment of a country it denounced as “racist and imperialistic,” but declaring a cultural and political war on that country.

We live with this legacy today. Not only is free speech on American campuses curbed to suit ideological ends, indoctrination that would have made a 1960s-era civics teacher blush is commonplace. To advance the cause of absolute equality based on gender, race and class, the New Left boldly restricts freedom. It’s all about power — or as Bettina Aptheker, a professor at UC Santa Cruz and a former FSM leader, says, “[T]he wisdom of true freedom is inexorably tied to who exercises power and for what ends.”

This ideology is an affront to our First Amendment right of free speech, a dagger at the heart of American liberalism. It is illiberal at its core. Too bad so many on the Left can no longer tell the difference between what is authentically liberal and what is not.