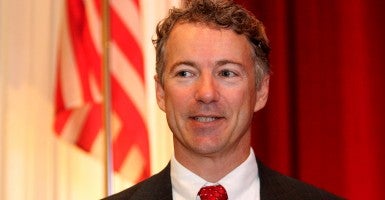 Sen. Rand Paul, R-Ky., told Politico that the GOP could win one third of the black vote in 2016 by promoting “criminal-justice reform, school choice and economic empowerment.”

In a phone interview with Politico, Paul said:

Paul told Politico that his meetings with African-Americans have been productive:

As I travel and I go and meet with African-American leaders — they may not be ready to embrace a Republican yet, but they say that they’re very happy that we’re competing for their vote. And they often tell me, ‘You know what? I haven’t seen my Democrat representative in a while.’

Paul added that he did not want to “limit” the GOP to a third of the vote: “The reason I use the number ‘a third,’ is that when you do surveys of African-American voters, a third of them are conservative on a preponderance of the issues. So, there is upside potential.” In a recent interview with CNN, Paul called the GOP’s failure to reach out to African Americans “the biggest mistake we’ve made.” Paul has recently met with African-American leaders in Ferguson, Mo., and students at historically black colleges.

Paul, a potential 2016 presidential candidate, was recently pictured on the cover of TIME magazine where he was called “The Most Interesting Man in Politics.”