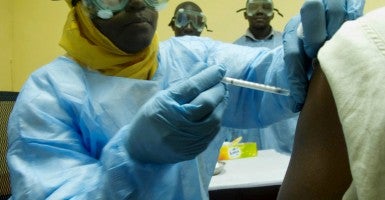 Some government health officials have joined Democrats in blaming the lack of an Ebola vaccine on budget cuts orchestrated by Republicans. However, more federal funding likely would not have led to creation of a vaccine to combat the deadly disease, since pharmaceutical companies had little incentive to do so.

In addition, a review of federal budget figures by The Daily Signal shows that in recent years steady funding has been available for programs related to vaccines, which can take many years to develop.

What’s more, Ebola is absent from the relevant strategic plan within the National Institutes of Health.

The claim by Dr. Collins in an interview with The Huffington Post angered some knowledgeable observers. They pointed to questionable NIH-funded studies and research initiatives over the years: one exploring why lesbians tend to be overweight compared to gay men, another on the sex lives of fruit flies and another looking into the communication skills of chimpanzees that throw their own feces.

“Entitlement spending on health care and retirement benefits, together with interest on the debt, is responsible for 85 percent of the projected spending increase over the next decade,” Romina Boccia, a Heritage Foundation expert on the federal budget,  told The Daily Signal.

Boccia noted that the government’s own documents show NIH spending hovered around $30 billion from 2010 to 2013. The current request puts spending at the same level.

Over that period, the budget of the National Institute of Allergy and Infectious Diseases, the relevant unit within NIH for Ebola, fluctuated between $4.3 billion and $4.8 billion. In his request for fiscal year 2015, President Obama proposed $4.4 billion.

According to the World Health Organization, two dozen Ebola outbreaks claimed the lives of roughly 1,500 persons since the disease’s discovery in 1976 — far less than the 4,400 killed so far overseas in the current outbreak.

“We were struggling for years to get [private sector] partners” to develop a vaccine, Anthony Fauci, director of the infectious diseases branch of NIH, said yesterday in testimony before a House Energy and Commerce subcommittee hearing.

Other infectious diseases such as AIDS warranted increased attention, research and funding from the NIH and Fauci’s unit, which researches infectious, immunologic and allergic diseases.

Over the past year, the NIH unit for infectious diseases has issued fewer than five solicitations for vaccine development, according to a review of contracting opportunities posted by the agency. Those solicitations, however, focus on HIV/AIDS through the agency’s AIDS division. No funding opportunities are posted for development of an Ebola vaccine.

No Mention of Ebola in Agency’s Strategic Plan

When deciding research priorities, Fauci’s unit adheres to a strategic plan to “guide future decision making.” Its 2013 blueprint identified three areas of emphasis relating to biodefense and emerging diseases, the category under which Ebola specifically falls: biology of pathogens and host-pathogen interactions; medical interventions such as diagnostics, vaccines and therapeutics; and global health research.

>>> A Second Health Worker Has Ebola. It’s Time for Government to Prove It Can Handle This.

In its strategic plan, the agency specifically mentions malaria, influenza and hepatitis C, among others. Although influenza is mentioned more than 14 times, Ebola is not addressed once.

“There’s nothing magical about getting a drug or vaccine for Ebola,” Fauci told The Huffington Post, adding:

We likely would’ve had it years ago if there were major investments on the part of a company. The scientific challenges are not profound.

The infectious diseases branch at NIH did not respond to The Daily Signal’s request for comment.

According to a March report from the Government Accountability Office, the agency often must prioritize which research projects, such as an Ebola vaccine, receive funding.

That means Fauci’s branch of NIH did not regard Ebola as a top priority prior to the current outbreak. It has produced two known patients who contracted the disease in America — both Dallas nurses who had treated an infected visitor from Liberia who later died.

If NIH were to call on pharmaceuti cal companies to develop a drug to fight Ebola, it could take years to do so.

An AIDS vaccine has been in development for more than 30 years, Dr. Larry Liao, research director of the Duke Human Vaccine Institute, told The Daily Signal. Other vaccines, such as for measles, are developed much quicker, he said.

“In the case of Ebola,” Liao said, “it’s a very difficult process.”

In the past, he said, there were few cases of Ebola, which made it “difficult [for the private sector] to take a stance to invest in this.”

Because the disease has spread in West Africa, interest has grown, Liao said:

This is now a national interest. The government has to take a leadership role in terms of money, resources and everything.

Vaccines and Treatments to Fight Ebola

According to the Centers for Disease Control and Prevention, several companies are developing experimental treatments or vaccines to fight Ebola.

Since the outbreak in Africa, the best known has been ZMapp, which was given to the two American medical missionaries diagnosed with Ebola while overseas, Fauci said yesterday.

The treatment proved to be effective when tested on animals. However, Fauci warned, doctors don’t know yet whether the treatment “benefited these patients,” and few treatment courses have been manufactured.

Fauci said the Department of Defense is working in conjunction with NIH to test both vaccines and therapeutics, which doctors give to those already infected with a disease.

One Canadian-made vaccine, called cAd3-EBO-Z, has been tested on primates and clinical trials on humans are beginning, the Associated Press reported.

>>> Commentary: On Ebola, Obama Gets an F

“It’s important to prove that it is safe and effective,” Fauci said of the treatments.

The Food and Drug Administration has not approved any Ebola vaccines.

New treatments must go through three phases and be tested on both primates and humans, Liao told The Daily Signal. With Ebola, though, testing vaccines on humans can be dangerous since trial groups must be infected with the disease.

One AIDS vaccine received a good response in primates but elicited a vastly different response from humans, Liao said.

“It takes time to really go through the scientific process,” he said.