Challenger Accuses Minority Leader of Being ‘Bought’ by the Koch Brothers. But She runs with Secretive Millionaires. 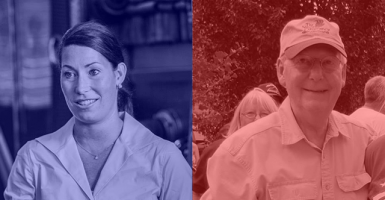 Senate hopeful Alison Lundergan Grimes criticized Republican incumbent Mitch McConnell Monday night for his ties to “the Koch brothers.” But Grimes apparently doesn’t apologize for her own ties to big  progressive donors through a network called the Democracy Alliance.

In her debate with McConnell three weeks before Kentucky voters decide whether she should replace him in the U.S. Senate, Grimes criticized the minority leader for acting as a “henchman” to Charles and David Koch, who are business tycoons, philanthropists and conservative mega-donors.

“I’m not bought and paid for by the Koch brothers,” Grimes said during Monday night’s debate.

>>> This Democrat Was Asked if She Voted for Obama. She Refused to Answer.

From Senate Majority Leader Harry Reid on down, Democrats in recent years have sought to demonize the Kochs for pouring millions into conservative candidates and  causes.

Grimes, Kentucky’s current secretary of state, though, maintains a connection to the Democracy Alliance, which funnels millions of dollars to more than 180 left-wing organizations through what critics call “dark money” practices.

According to an agenda from the gathering, Grimes participated in a “partner-organized” meet-and-greet.

“Partners” is the word the Democracy Alliance uses for its donors.

A video produced by the right-leaning America Rising PAC shows Grimes walking through the Chicago hotel where the conference was held. She did not answer questions.

The Grimes campaign did not respond to a request for comment by The Daily Signal.

An internal memo from Democracy Alliance spokeswoman Stephanie Mueller describes the network as the “largest convener of progressive individual and institutional donors and serve as a ‘center of gravity’ for the progressive funding world.”

“Over the past nine years, the Democracy Alliance has aligned donors, leaders in the progressive movement, and political infrastructure in order to achieve victories at the ballot box and in policy fights…,” the memo says.

A briefing book for conference attendees, first obtained by Politico, outlines plans to air advertisements and mobilize crucial voter blocs ahead of the Nov. 4 midterm elections to boost progressive candidates.

The Democratic Senatorial Campaign Committee has pumped more than $2 million into the Senate race in the Bluegrass State. It said yesterday, though, that it will not run any more ads in the final three weeks.