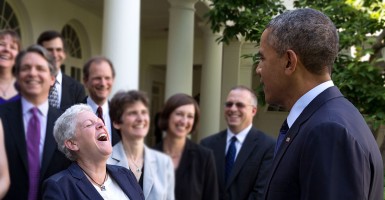 Republican lawmakers say the U.S. Environmental Protection Agency enjoys a “beyond cozy” relationship with a liberal environmental action group that seeks to reshape national energy policies in a way that would hurt American businesses and families.

“The EPA has been one of the least transparent agencies I have ever seen, but it’s become apparent that their lack of transparency is to hide the influence that an organization so heavily focused on undermining U.S. businesses and families has at EPA,” Vitter said.

Vitter and House Oversight and Government Reform Chairman Darrell Issa, R-Calif., have directed staff to look into whether the EPA broke federal law in developing the carbon emissions regulations.

Newly released emails between the EPA and the green group, Vitter said, show that the agency didn’t push to  “consider all stakeholders’ opinions equally.” He added:

While both sides have denied NRDC’s improper influence over the EPA’s development of the carbon rule, these emails clearly demonstrate their beyond-cozy relationship and force the question: Who is working for whom? Vitter was referring to the EPA’s rebuttal of allegations by GOP lawmakers that the Natural Resources Defense Council, a New York-based international environmental organization, had an outsized influence on the agency’s proposed rule to limit carbon emissions at existing power plants.

The emails surfaced after a joint request last month to EPA Administrator Gina McCarthy by Vitter, Issa and four other Republican lawmakers.

Nick Loris, a Heritage Foundation economist who focuses on energy and the environment, calls the Obama administration’s new carbon rules “nothing short of an attack on affordable, reliable energy.” Allegations of the environmental group’s undue influence arose July 6 when The New York Times reported on the EPA’s close relationship with three of the organization’s principals—lawyers David Doniger and David Hawkins and scientist Daniel Lashof.

“The three were as seasoned and well connected as Washington’s best-paid lobbyists because of their decades of experience and the relationships they formed in the capital,” reporter Coral Davenport wrote.

The trio’s 110-page proposal, focused on cutting carbon pollution from coal-fired power plants, was “widely viewed as innovative and audacious,” the article said, adding: “On June 2, President Obama proposed a new Environmental Protection Agency rule to curb power plant emissions that used as its blueprint the work of the three men and their team.”

In a July 10 email obtained by Politico, EPA chief McCarthy scoffs at the suggestion of an inappropriately close relationship with the green group. On Sept. 4, two days after Vitter and Issa pressed their questions in their letter to McCarthy, the Natural Resources Defense Council denied in a blog post that it had influenced the actions of the EPA “outside of the normal regulatory process.” But the emails between EPA chief McCarthy and Doniger, the green group’s policy director for climate and clean air, reveal close communications dating back to 2010.

McCarthy was assistant administrator at the EPA from 2009 to July 2013, when the Senate confirmed Obama’s nomination of McCarthy as administrator after a four-month confirmation battle in which Vitter posed more than 500 questions.

Of her agency’s announcement just before Christmas 2010 of amendments to the mandatory reporting of greenhouse gases, McCarthy emailed Doniger, “this success is yours as much mine.”

In 2011, email correspondence produced as the result of the congressional inquiry show at least five meetings between McCarthy and representatives of the green group regarding Section 111, which Loris describes as the “meat” of the Obama administration’s climate change regulations. In June 2011, Doniger emailed McCarthy a copy of the organization’s “Technical and Legal Framework for Power Plant Carbon Emissions Standards Under Clean Air Act Section 111,” requesting a meeting on the environmental group’s proposal.

McCarthy’s response to Doniger includes the words:  “I would never say no to a meeting with you.” In their Sept. 2  letter to McCarthy, six GOP lawmakers — including Vitter and Issa — demanded release of documents and information regarding the environmental group’s involvement in drafting the EPA’s proposed rules. They wrote:

The fact that an ideological and partisan group drafted a rule that places a tremendous cost on everyday Americans through increased electricity prices is harmful and outrageous. … Accordingly, these practices must cease immediately. Paul J. Larkin, a senior legal research fellow at The Heritage Foundation, said the emails don’t appear to show anything “unlawful” about the EPA’s relationship with the Natural Resources Defense Council, but stressed that the agency has a responsibility to independently assess outside recommendations. Larkin said:

There is nothing inherently unusual or unlawful about a private organization, such as the NRDC, contacting a government agency, such as the EPA, in an attempt to influence public policy. In fact, the First Amendment expressly guarantees every person the right to petition the government for a redress of grievances. Nor is there anything inherently unusual or unlawful in the EPA’s willingness to listen to what an organization like the NRDC has to say.

At the same time, every government official, whether employed by the EPA or elsewhere, is obligated to use his or her best judgment to decide what policy best serves the public, not the interests of a private organization. That is where the rubber meets the road.

Citing the extent to which the EPA’s policies affect Americans across the country, Vitter called the environmental group’s influence “absolutely inappropriate.”

“When EPA’s policies affect the whole spectrum of American businesses and families, which they do, it is absolutely inappropriate for one outside organization to have excessive influence on those policies, and this is not how our federal government should be run,” the Louisiana Republican told The Daily Signal.

“In order to have a fair regulatory process, EPA should consider all stakeholders’ opinions equally. These emails show how that’s not the case,” he said.

Warning that the EPA’s carbon plan would increase the cost of energy and most goods for American families, Vitter called it the Obama administration’s attempt to impose in America the failed climate policies that have been a disaster in Europe:

This carbon plan would mean a permanent stagnant economy with limited growth potential that will kill hundreds of thousands of jobs and projects all across the country. It will decrease electricity reliability the same as in Europe, and it will be a crushing blow to the poor and elderly as energy poverty becomes a new normal just like what we’re seeing in Europe.

Reynolds’ blog attacks Vitter, Issa and other Republican lawmakers for pushing a “flawed, cherry-picked narrative that simply ignores the well-documented and widely reported and recognized sweep and range of the agency’s engagement with the public, states and stakeholders over the past 14 months.”

Of the idea that the EPA “inappropriately” collaborated with the Natural Resources Defense Council, Reynolds writes:

Our proposal, announced in June, was developed through extensive public outreach—one that reached tens of thousands of people across the country. EPA consulted with states, power companies, local communities, environmental groups, associations, labor groups, tribes, and many more. Before we put out the proposal, EPA met with more than 300 stakeholders, to gather their thoughts and ideas.

This particular organization has advocated relentlessly to harm our energy and manufacturing sector, and EPA providing this organization an outsized role in the regulatory process is incredibly unfair to American families that rely on a healthy economy to sustain their livelihoods.