Report: Obamacare Will Add $131 Billion to Federal Deficits in Next Decade 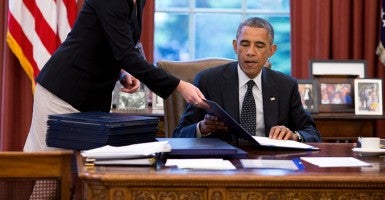 Among President Obama’s many high-profile health care promises, there is this gem from his 2009 address to Congress: “I will not sign a plan that adds one dime to our deficits–either now or in the future.”

But according to Republican staff on Senate Budget Committee, those dimes are starting to pile up. The Senate staff report says that the Affordable Care Act will add $131 billion to the federal deficits over the period 2015 to 2024.

In brief, the Republican Senate Budget Committee staff say that, based on an extrapolation from the July 2012 estimate of the Congressional Budget Office (CBO), the projected ACA contribution to deficit reduction would amount to $180 billion over the period 2015 to 2024. Positive factors, based on CBO analyses, contribute to that portion of the  ten-year deficit reduction.

For example, the implementation of the health insurance coverage provisions of the law, as CBO estimated in April of 2014, improves the overall deficit outlook because the 10-year cost of those provisions (reflecting, among other things, narrower networks of doctors and hospitals) is now estimated to be $83 billion less than what CBO projected in 2012. Score one for a deficit decrease.

But, the Republican Senate Budget Committee staff, who report to Sen. Jeff Sessions, R-Ala., also note, certain other intervening factors interrupt this progress toward fiscal rectitude.  Over the period 2007 to 2010, before the implementation of the Affordable Care Act, CBO found that Medicare spending growth per capita was 3.8 percent, compared to 7.1 percent over the period 2000 to 2005.

Nonetheless, CBO’s baseline projections of higher health care savings was based on the assumption that Medicare and Medicaid spending would also be higher and thus the savings from a slowdown in that spending would thus be greater. In fact, however, Medicare and Medicaid spending was even lower than originally anticipated; the CBO baseline changed, and thus the expected health care savings are now projected to be lower–by as much as $132 billion. So, score one for a deficit increase.

The Republican Senate Budget Committee staff then examined the impact of the ACA’s tax provisions on the labor force. In 2014, CBO reported that the law would reduce the total number of hours worked in and thus reduce the total labor compensation by 1 percent by 2024, including taxable income. Based on the labor force data, the staff estimated that the total federal revenue loss over the period 2017 to 2024 would amount to a net $262 billion. Score two for a deficit increase.

Bottom line: Reconciling the data, the Republican Senate Budget Committee staff report  thus concludes that over the period 2015 to 2024, the deficit would increase by $131 billion.

Of course, this, or any other such calculation, is dependent upon certain assumptions, variables or future policy changes. It’s a tough, often thankless, job. Like that of the CBO, the Senate Budget Committee staff estimate is thus held hostage to a multiplicity of factors that they cannot control or foresee. In June 2014, the CBO, which had previously forecast the health law’s contribution to deficit reduction, announced that, amidst various administrative changes and shifting baselines, it would not estimate the ACA’s budget effects.

So, the Senate Budget Committee Republican staff is going where CBO will not tread. For that reason, these Senate Budget Committee analysts  are making a valuable contribution to the ongoing national debate over the Affordable Care Act. Not only is their work based on the CBO’s widely published data, they have made their assumptions and their methodology crystal clear, and thus easy to replicate or refute. That’s the beauty of their work. It should invite honest debate–in and out of Congress.

And, yes, it’s time for another congressional oversight hearing.