Thanks to Obamacare, Health Costs Soared This Year 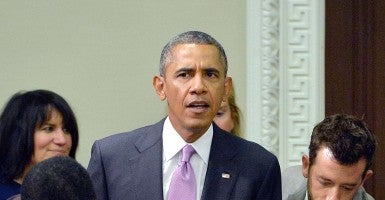 On November 15, open enrollment in the Obamacare exchanges begins again. Before the second act of our national healthcare drama commences, let’s review what we’ve learned in Act I.

For starters, everyone now knows that federal officials are challenged when it comes to setting up a website. But they’ve demonstrated the ability to dole out a huge amount of taxpayers’ money for millions of people signing up for Medicaid, a welfare program. And they’ve proved they can send hundreds of millions of federal taxpayers’ dollars to their bureaucratic counterparts in states, like Maryland and Oregon, that can’t manage their own exchanges. But there are many other lessons to be gleaned from Year One of Obamacare. Here are three of the most important ones.

1. Health costs jumped—big time. Huge increases in deductibles in policies sold through the exchanges were a big story in Florida, Illinois and elsewhere. While the average annual deductible for employer-based coverage was a little over $1,000, the exchange deductibles nationwide normally topped $2,000.

Notwithstanding President Obama’s specific promise to lower the typical family premium cost by $2,500 annually, premium costs actually increased. D2014 data for the “individual market” shows that the average annual premiums for single and family coverage rose in the overwhelming majority of state and federal health-insurance exchanges all around the country. In eleven states, premiums for twenty-seven-year-olds have more than doubled since 2013; in thirteen states, premiums for fifty-year-olds have increased more than 50 percent. For the “group market,” the Office of the Actuary at the Centers for Medicare and Medicaid Services (CMS) estimated on February 21, 2014, that 65 percent of small firms would experience premium-rate increases, while only 35 percent were expected to have reductions. In terms of people affected, CMS estimated 11 million Americans employed by these firms would experience premium-rate increases, while about 6 million would see reductions. So much for “bending the cost curve down.”

2. The law reduced competition in most health-insurance markets. A limited analysis by the Kaiser Family Foundation found that in 2014, large states like California and New York were more competitive, but Connecticut and Washington were less competitive. The Heritage Foundation conducted a national analysis and found that between 2013 and 2014, the number of insurers offering coverage on the individual markets in all fifty states declined nationwide by 29 percent. On a county level, 52 percent of U.S. counties had just one or two health-insurance carriers. In 2014, at least, the law did not deliver on its promise of more personal choice and broader competition.

3. We still don’t know for sure how many people are actually insured. Following the disastrous October 2013 Obamacare “roll-out,” the Congressional Budget Office (CBO) estimated that about 6 million (rather than 7 million) would enroll in the exchanges. Last April, administration officials reported that they reached and surpassed their goal, enrolling over 8 million people in the health-insurance exchanges. They then declared the health-care debate, like the Iraq War, “over.”

That declaration appears to be premature. The administration now concedes that there are 700,000 fewer persons in the exchanges. Of course, we can expect some attrition. But exchange enrollment is not the same as insurance coverage. CBO said it best: “The number of people who will have coverage through the exchanges in 2014 will not be known precisely until after the year has ended.” Exactly.

Beyond the seemingly endless surveys, estimates and guesstimates, we do have some raw data. Between October 1, 2013, and March 31, 2014, there was a net increase in individual coverage of 2,236,942, but there was a net decrease in group (employment-based) enrollment: it fell by 1,716,540. Enrollment in Medicaid and the Childrens’ Health Insurance Program (CHIP) increased by about 5 million over that same period. We’ll know more later, as CBO said, especially how many Americans are losing their employment-based coverage.

Who enrolls is also crucial. In 2013, Obama administration officials said that their goal was for young adults between the ages of eighteen and thirty-four to account for 40 percent of exchange enrollments. On April 17, 2014, the White House announced that only 28 percent of those enrolled through the federally administered exchanges were between eighteen and thirty-four years of age—the crucial age bracket for a robust and stable insurance pool—but that 35 percent of the total enrollees were under the age of thirty-five. That made it sound as though the program was fairly close to reaching its target. But thanks to excellent reporting by Politico, we learned that the bigger number included children enrolled in the exchanges. Nice try.

Maybe 2015 will bring better news for Obamacare. But don’t bet on it.