Unbelievable: City Demands Girl Tear Down Her Playground…That She Received from Make-A-Wish Foundation 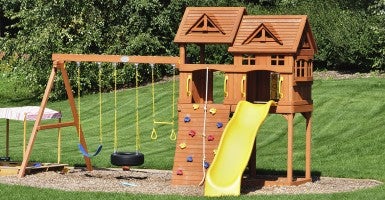 We assume that everyone, including government officials, exercise common sense when making decisions.

So much for that assumption: recently, a local government took an action that could destroy the dreams of a young girl for apparently no good reason.

Tiffany Miranda is a 10-year-old girl from Santa Fe Springs, Calif., who suffers from a rare, serious and incurable disease called Lennox-Gastaut syndrome. Because of this condition, she frequently experiences seizures. Some can last all day.

Her parents, Jessica Torres and Felix Miranda, were concerned about bringing her to public parks. So they were thrilled when the Make-A-Wish Foundation provided them with playground equipment so Tiffany could play in the safety of her home.

“She’s gone through so much,” Tiffany’s dad said. “It really touches both my wife and I,” Tiffany’s grandfather remarked, “It’s a dream come true for her. I just love to see that smile.”

But not everyone loved to see her smile.

According to CBS Los Angeles, the city government of Santa Fe Springs issued citations that ordered Tiffany’s parents to tear down her playground–claiming the storage of items in the front yard and backyard playground area were a “public nuisance” (which is different from an attractive nuisance, such as a swimming pool without a fence around it).

“When I asked the city, ‘So where do you expect my daughter to play?’ they said ‘Well, the city’s not responsible for your daughter’s disability,’” Tiffany’s mother, recalled. “They said ‘Your Tiffany is not our problem.’”

The tickets issued to Tiffany’s parents, however, state the exact opposite, and it appears the playground area is enclosed by some sort of fencing.

Crushing the dreams of children seems to be a routine action for some government bureaucrats:

Abuse of the law resulting from a monumental lack of common sense is not limited to discrete segments of society or isolated government officials. It seems to be, if not pervasive, certainly not purely episodic. Whenever it occurs, it can seriously affect every facet of the lives of the parties involved—including children who suffer from serious diseases and just want to enjoy playing outdoors.

Memo to local governments: If you are trying to shut down a child’s dream come true from the Make-A-Wish Foundation, you’re probably doing something seriously wrong.