This Is Weird: Leader of North Korea Seems to Have Disappeared 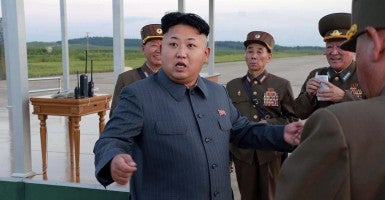 North Korean leader Kim Jong Un has not been seen in public for more than a month, generating speculation that his absence is due to failing health or political intrigue. Given the paucity of information, keeping track of Kim is tougher than winning at three-card monte, and the stakes are much higher: the potential instability of a nuclear-armed nation.

After Kim’s notable absence from the important Supreme People’s Assembly meeting Sept. 25, North Korea’s official media announced the leader was suffering from “discomfort.” Kim has gained significant weight since his ascension to power two years ago, and the rotund leader had been observed limping during several public appearances during the summer.

Experts postulated that Kim was suffering from gout, diabetes, a blood clot in the brain and even weight gain brought on by an addiction to cheese developed during his youth as a student in Switzerland. A South Korean newspaper quoted a North Korean source stating Kim had undergone surgery after suffering fractures of both ankles brought on by obesity, a grueling touring schedule and wearing “Cuban heels.”

Alternatively, some analysts assessed Kim as suffering from a 9-millimeter headache (assassination) or an attempted coup. One report speculated that Kim had been overthrown by Vice Marshal Jo Myong Rok, vice chairman of the National Defense Commission, until someone remembered that Jo died in 2010.

On Oct. 1, North Korean official media announced that Kim had sent a congratulatory message to Chinese President Xi Jinping to celebrate the 65th anniversary of the founding of the People’s Republic of China.

On Oct. 3, a senior-level North Korean delegation traveled to Seoul, ostensibly to attend the closing ceremonies of the Asian Games. The delegation included what is perceived as the second- and third-most powerful people in North Korea. The delegation conveyed that Kim’s health was fine, and it is unlikely that such elite officials would leave the country had a coup occurred.

So Kim’s absence may well turn out to be another tempest in the North Korea teapot brought on by false assessments and overreaction. But his absenteeism has returned two issues to prominence: Just how strong is Kim’s grip on power, and what would happen if he died, either from a health crisis or in a coup?

Kim has purged hundreds of officials since assuming power in late 2011. In December 2013 he executed his uncle, Jang Song Taek, previously seen by the West as the second-most powerful man in North Korea. Kim even removed officials he had earlier promoted, replacing the minister of defense and chief of the general staff five times each during his first two years in power.

Korea watchers are debating whether the extensive purges show Kim is firmly in control and confident enough to remove even senior North Korean officials or, conversely, a weak, embattled ruler desperately fighting off challengers. Similarly, it remains unclear just how stable the regime is.

Nor does anyone know what would happen if the young leader were to prematurely shuffle off this mortal coil. Just as was the case when his father, Kim Jong Il, suffered a stroke in 2008, there is no formal succession plan in the North Korean Constitution. Following his stroke, Kim Jong Il initiated the transfer of power to Kim Jong Un, a process the father personally oversaw until his death in 2011. Today, there are no indications the 31-year-old leader has begun such a process.

Since the execution of Jang and the purge of seemingly every senior official, there is no way to predict who would eventually grasp the golden ring of power after Kim Jong Un’s death. Although North Korea and the world would be better off with the end of the Kim government, there are great concerns among the U.S. and its allies over the potential ramifications of regime collapse. Could it unleash civil war, loss of control of the North’s nuclear weapons or hostility toward its neighbors?

North Korea is currently out of the world’s spotlight, overshadowed by a plethora of seemingly more pressing hot spots. Moreover, Pyongyang has kept a relatively low profile since raising tensions to dangerously high levels in early 2013 when it threatened nuclear attacks on Washington, Seoul and Tokyo. North Korea is engaged in one of its periodic charm offensives, hoping to induce economic benefits or an easing of international sanctions against it.

But, behind the scenes, the regime continues to make progress on its nuclear weapons programs and a spectrum of missiles able to deliver them. Since Kim Jong Un assumed power, North Korea has initiated, expanded and accelerated construction efforts for fissile material production (both plutonium and uranium), nuclear test preparations and missile launch facilities.

Is North Korea on the brink of collapse and turmoil? Probably not. But with all power residing in Kim, the government may be just one bullet or heart attack away from a crisis. Here’s hoping Washington is not so distracted by events in Syria, Iraq and Ukraine that it fails to keep a keen eye on Pyongyang.