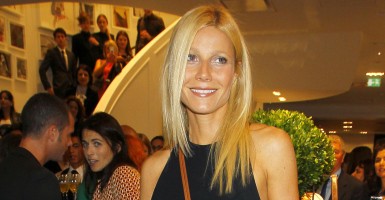 Gwyneth Paltrow would like President Obama’s life to be easier.

The Oscar-winning actress held a fundraiser Thursday for the Democratic National Committee at her home in Los Angeles, during which she extolled Obama.

During the fundraiser and dinner, priced at $15,000 per head, Paltrow complimented the president on his looks, saying, “you’re so handsome that I can’t speak properly.” She told him that she is “one of [his] biggest fans, if not the biggest.”

Paltrow also applauded Obama for his efforts on issues such as climate change and equal pay, which she called “very important to me as a working mother.”

The actress, who was listed as one of the world’s most powerful celebrities by Forbes Magazine, came under fire in March after suggesting that her acting career brought challenges to motherhood that were more difficult than those faced by a working mother with an “office job.”