Why Are We Paying $300 Million to Help the Brazilian Cotton Industry? 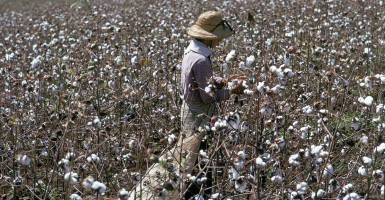 Taxpayers are being forced to pay $300 million to help the cotton industry–the Brazilian cotton industry–in order to resolve a long-standing dispute between the U.S. and Brazil over cotton subsidies.

In September 2004, after nearly a year-long period of hearings and review, a WTO dispute settlement panel found that certain U.S. agricultural support payments and guarantees were inconsistent with WTO commitments and resulted in market distortions that depressed international cotton prices, as asserted by Brazil.

In 2009, Brazil announced it was going to impose $829.3 million in countermeasures against the U.S., as authorized by the WTO, including tariffs on goods outside the agricultural sector and suspending American intellectual property rights.

The United States avoided these retaliatory measures by agreeing to pay Brazil $147.3 million annually for the actionable subsidies, money designated to help the Brazilian cotton sector. According to CRS, “By October 2013, the United States had already made cumulative payments to Brazil’s cotton fund of nearly $496 million (assuming that payments started in May 2010, the month after the memorandum of understanding was agreed to).” The U.S. stopped making payments as of October, 2013 (USDA Secretary Tom Vilsack alleged that authority no longer existed to make the payments).

Last week, after more than a decade disputing American market-distorting subsidies for the cotton industry, the United States and Brazil agreed to a $300 million payment to Brazil that will temporarily put the matter to rest.   In return, Brazil agreed to terminate its existing World Trade Organization action against the U.S. and not bring any new WTO actions against these programs for several years.

The Office of the United States Trade Representative explained that Brazil has agreed not to bring any new actions for the duration of the 2014 farm bill. However, this does not clarify what would happen if there were an extension of the 2014 farm bill. Therefore, to be more precise, the duration of the agreement as outlined in the Memorandum of Understanding between the two countries generally expires on September 30, 2018. At this time, Brazil presumably could again bring new WTO actions regarding this long-standing dispute.

Taxpayers are paying at least three times because cotton subsidies violated WTO rules. First, taxpayers subsidized U.S. cotton farmers, then they had to pay penalties to Brazil for those cotton subsidies, and finally they pay for the impact the subsidies have on the cotton market, such as through inefficiencies and loss of innovation.

By enacting new cotton subsidies in the 2014 farm bill, Congress didn’t eliminate the threat of future WTO actions connected to cotton. Even Brazil could presumably challenge the cotton subsidies once the current agreement lapses. The primary cotton subsidy is a new program called Stacked Income Protection Plan (STAX) which is a special supplemental crop insurance program just for cotton. Taxpayers are forced to subsidize an astonishing 80 percent of the premiums for participating farmers, and the program guarantees anywhere from 70 to 90 percent of anticipated revenue (it covers shallow losses, i.e. minor losses). Brazil had argued that this new program would increase U.S. trade-distorting subsidies.

Some legislators on both sides of the aisle have expressed their displeasure of taxpayers having to pay $300 million. Rep. Ron Kind, D-Wis.,argued, “This outrageous waste of taxpayer dollars continues. Our annual payoffs to Brazilian cotton farmers should have been eliminated long ago, but we’re sending them a $300 million payment instead.”

Many Americans are having a tough time making ends meet. Yet taxpayers are being forced to pay $300 million because Congress couldn’t develop policies that didn’t violate WTO rules and to temporarily avoid future WTO actions by Brazil regarding cotton subsidies. That’s the farm bill though (including the new farm bill)—loaded with subsidies many of which could result in WTO violations.