Taxpayers Forked Over Back Pay for a Food Inspector Who Didn’t Notice Rats in a Pasta Plant. Now, They Could Pay for His Union Lawyer, Too. 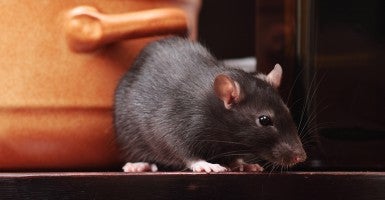 Taxpayers are on the hook for a government food inspector who missed rats in flour. (Photo: Getty Images)

A food inspector for the U.S. Department of Agriculture who was suspended for failing to discover that rats had infested a pasta-making plant has won a fight to overturn his punishment and get back pay.

Now, a federal labor board has directed an arbitrator to consider whether taxpayers also should reimburse the $67,589-a-year federal worker for legal costs–which his union already covered–even though the food inspector didn’t notice rat feces in a storage room where a bag of flour was ripped open.

Critics of government inefficiency call the sequence of events a cautionary tale about the difficulty of punishing, much less firing, federal employees for poor work — even when it endangers public health.

Anyone with Boesen’s job title is responsible for inspecting “designated premises where food products are produced or otherwise handled to ensure the integrity and safety of the manufactured” product, papers filed with the Federal Labor Relations Authority show.

This is what happened, according to findings in the case:

USDA management found rodent feces throughout the plant, including a room for dry storage that held bags of flour. One bag was torn open.

USDA officials shuttered the pasta plant for more than a week because of the rat infestation, which they described as “extensive” and “widespread.” The presence of the rats, they said, also allowed a “serious health and safety issue to develop.”

Management suspended Boesen for five days for failing to note the infestation in his inspection.

“The resulting five-day suspension is on the lenient side of progressive discipline and took into account [Boesen’s] long and satisfactory service,” the USDA argued in filings with the Federal Labor Relations Authority.

The union argued the rat infestation easily could have occurred in the span of two days — when the relief inspector took over — and said the USDA “failed to apply progressive discipline.”

Taking the Inspector’s Side

To settle their differences, the agency and the union agreed to hire an outside arbitrator–as provided by the union contract–to consider Boesen’s grievance and rule on it.

The Federal Labor Relations Authority, an independent entity tasked with overseeing labor statutes, stipulates that collective bargaining agreements must include procedures for arbitration of unsettled grievances.

The arbitrator, Robert Steinberg, found that Boesen was distracted because he was mourning the death of his mother-in-law. Steinberg criticized the USDA for imposing such punishment on a “25-year professional with a virtually unblemished work record” without seeking an explanation for his negligence.

Steinberg also found that Boesen did not act “willfully or in reckless disregard of his duty and the public safety.”

As a result, the food inspector’s suspension was overturned and he got a written reprimand instead.

The arbitrator also said Boesen was entitled to five days’ back pay and credit for lost benefits. He received that compensation in 2012.

According to a database of government salaries kept by the Asbury Park Press, Boesen made $67,589 in 2010. The average salary for a consumer food inspector last year was $56,892.

“This union valued the job security of its members more than it valued protecting public health,” James Sherk, a labor economist at The Heritage Foundation, told The Daily Signal. “Federal collective bargaining gave [the union] the power to turn its preference into public policy.”

The Daily Signal has received no response to a request for comment from the union local where Boesen is a member.

Now, two years after Boesen was awarded back pay and lost benefits, the Federal Labor Relations Authority is exploring whether the USDA should pay his lawyer’s fees and related expenses.

Steinberg originally decided the federal agency would not have to do that.

In a decision posted Sept. 30, two of the three presidential appointees who make up the labor authority–Carol Waller Pope and Ernest DuBester–asked Steinberg to submit in writing his reasons for denying the union’s original request that USDA pay its lawyer fees and expenses.

Sherk said Steinberg could deny the union again while providing the explanation sought. If that occurred, he said, it’s likely the union would appeal.

Historically, two members of the labor authority are of the same political party as the president. The third is of the opposing party.

Republican member Patrick Pizzella wrote a dissent to the Sept. 30 decision citing his concerns with the outcome.

“The facts of this case are probably better suited to a reality TV show produced by the Food Network in conjunction with Animal Planet than they are for a decision of the Federal Labor Relations Authority,” Pizzella wrote.

The mission of USDA’s Food Safety and Inspection Service is to “ensure that the ‘nation’s commercial supply of meat, poultry, and egg products … is safe [and] wholesome,’” Pizzella wrote, adding:

What is significant is the unavoidable conclusion that the grievant’s failure to properly inspect the pasta production facility — the very reason the agency exists and the specific purpose for which the grievant is employed — created the potential for a serious health crisis and idled an entire plant for over a week.

Pizzella cited the only people he said benefited from the “outrageous tale” –the food inspector, the union lawyers, the arbitrator and the rats that “set up shop in the pasta plant as a consequence of the grievant’s negligent inspection that failed to discover their presence in the first place.”

Sherk, the labor economist at Heritage, drew another conclusion from the rats-in-the-flour case.

“This demonstrates why unions do not belong in government,” he said. “Government unions put the interests of the government employees ahead of the public good.”

Sherk also underlined the difference in disciplinary action for employees who are unionized and those who are not.

At a private company that isn’t unionized, he said, it isn’t likely that an employee suspended for neglecting a rat infestation would have that discipline overturned. For companies with unionized employees, though, punishing workers for poor performance is difficult, he said.

In 2010, for example, 13 Chrysler workers were punished for smoking marijuana and drinking alcohol during their work day at a Michigan plant.

However, after the employees went through arbitration backed by their union, United Auto Workers, their punishments were overturned. They returned to work in 2012.

During a July hearing before the House Oversight and Government Reform Committee, Sherk said it takes “heroic” efforts to remove a federal employee from his or her position.

Committee members agreed. In a report focused on the targeting scandal at the Internal Revenue Service, congressional investigators noted the lengthy process for firing federal employees.

“The current personnel practices are unfair to American taxpayers and do little to deter misconduct by federal employees,” the report states.