Take 5: Debate Attacks Scored by the Numbers in This Senate Race 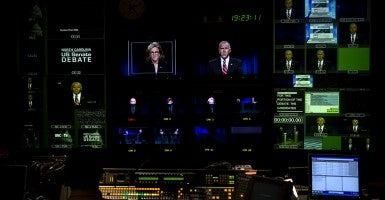 Count on it: Kay Hagan and Thom Tillis meet to debate Tuesday night at the University of North Carolina Television studios. (Photo: Newscom)

Unable to break free from each other in the polls, North Carolina’s Senate candidates played offense Tuesday in their second debate. Incumbent Democrat Kay Hagan and her Republican challenger, North Carolina House Speaker Thom Tillis, both used a specific weapon — numbers — to make their attacks clear.

With time running out before the Nov. 4 election, easy-to-understand numbers allowed the candidates to score political points in these tense exchanges during their one-hour encounter moderated by George Stephanopoulos of ABC News at the University of North Carolina Television studios in Research Triangle Park.

100 percent. Hagan continued her usual attacks on Tillis’s education and health care record, but also rebuked him for his stance on marriage.

The incumbent said she opposed a statewide ban on same-sex marriage, which the speaker said he would continue to defend in North Carolina despite the Supreme Court’s decision not to take up state challenges.

“For the last year you’ve sat on the Foreign Affairs Committee and you’ve missed half the meetings,” Tillis said. “Where were you and why were other commitments more important?”

Unfortunately, Tillis confused Hagan’s committee assignment. She is on the Armed Services Committee, not Foreign Affairs.

Tillis responded that laws already on the books covered women, and proceeded to list female relatives as evidence of his support for equal pay.

96 percent. After Tillis said Hagan voted with President Obama most of the time, she was asked which of her votes she regretted. She failed to come up with one.

24. Tillis has focused on Obamacare throughout the race, and did so in the debate. Hagan listed several changes she would make to Obamacare. Tillis blasted her anyway for telling North Carolinians, as Obama did, that they could keep their health insurance plans.