Wisdom Should Prevail Over Panic: Solution to Ebola in US Isn’t Banning Travel 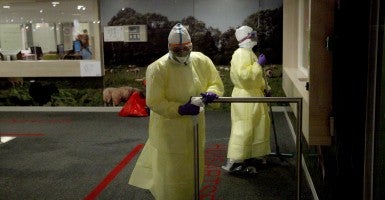 Staff of the Albert Schweitzer Hospital in the Netherlands wearing protective suit clean up inside the clinic. A man from Sierra Leone showing Ebola-like symptoms is being treated there. (Photo: Newscom)

Ellen Prichard is a member of the Young Leaders Program at The Heritage Foundation.

A first case of Ebola has hit the United States, resulting in concerns and questions about containing the virus and keeping it out of the country.

Those who promised Ebola never would reach our shores were being unrealistic.  The disease is now so widespread that a handful of cases spreading internationally is inevitable.

What all citizens should insist on now is that U.S. officials take swift and prompt action to ensure there is no wider outbreak in the U.S..  The best way they can do that is with sound public policies and effective and honest risk communications to our citizens. They also can help stem the spread of the disease in affected regions.

The infected man, Thomas Duncan, was in Liberia when he helped a woman who had symptoms to the hospital. When he left the country he was screened but showed no symptoms. He then entered the U.S. at Dulles International Airport via Brussels.

Reaction to this Ebola case has been swift, which is understandable given the situation. Some have made well-intentioned calls to close the borders and seal off any contact with the affected areas.

It may seem like a quick, effective measure to protect U.S. citizens, but this procedure has not worked in the past and is unlikely to do so now. The aim should instead be to deal with cases as they appear and fight wider outbreak.

In past major disease outbreaks, many communities and cities tried to seal themselves off from surrounding areas. The costs were high, and the viruses still managed to affect these communities.

Communities that instead devoted their medicine, money and people to limiting the spread within their communities actually fared much better.

Tom Frieden, the director for the Center for Disease Control and Prevention, also says sealing off the borders would be a problem. In an interview Friday, he told Fox News:

I wish we could get to zero risk by sealing off the border. But we can’t. The only way we are going to get to zero risk in this country is by controlling it in Africa. Until that happens, Americans may come back with Ebola. Other people who have a right to return or a visa to enter may come back. People will go to third countries and come from there. Sealing them off – first off won’t work. Second off, it will backfire. Because if we can’t get help in there, then we’re not going to be able to stop the outbreak and ultimately we will end up at higher risk, not lower risk.

Closing the borders also presents enormous costs, including the economic loss to the countries.

The key is not to focus on a futile fight to keep Ebola out, but to continue the efforts to detect those infected and deal with the individual instances quickly and effectively. In other words, let’s ensure that no single case turns into a larger outbreak.

One possible solution is to add an arrival screening process for travelers from affected areas. This is an intermediate additional safety measure that could catch someone who was not detained at their point of departure. It would add some costs, but these would not be huge, and, if targeted only to people originating in the affected area, would not be an inappropriate hindrance to movement.

RAND notes, “Because of how Ebola is transmitted and the strong health infrastructure and infection control practices in the United States, the likelihood of a major Ebola outbreak is small.” The state-of-the-art medical facilities in the U.S. as well as effective containment practices make is highly unlikely Ebola will spread quickly here.

Ebola presents a major challenge to authorities for managing and protecting U.S. citizens. Sealing off the borders from these countries is not feasible and does not present the best solution for dealing with the virus. America must resist the urge to react out of fear and use wisdom instead. A prudent additional step of increasing screening will help. A panicked overreaction will not.